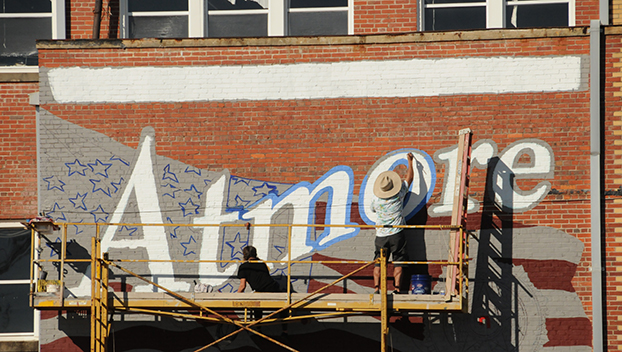 The Atmore Area Chamber of Commerce and the American Legion Post 90 are bringing a new public art installation to the city, according to a release.

According to officials, the chamber is aiding in funding an artist to paint a mural that will go on the southside of the American Legion’s building.

The mural will be able to be seen from several blocks away and will showcase Atmore’s patriotism and appreciation for our country, chamber officials said.

The mural will be painted by Dimensional Design Group—a partnership between artists Wes Hardin and Elaina Finuff.

Hardin has 45 years of artistry under his belt. He is a graduate of the Art Institute in Fort Lauderdale, Fla., where he majored in advertising and design.

Their artwork is mainly focused in the southeast, but they even have murals in locations including Michigan and Virginia. Most murals painted by the group are for small businesses in small towns and are representative of the town’s history, officials said.

The area behind the American Legion’s building will also be transformed into a green space. The garden terrain will be available for the public to enjoy. It will feature several benches, a fountain stage, pedestrian walkways, pollinator plants and more. One of the garden’s main features is a stormwater infiltration system which boasts the hopes of inspiring positive community development by changing the living environment of the town by educating water conservation through natural resources.

“We are excited to have new and great things coming to our city, and we are even more excited that we get to be a part of such a remarkable effort,” Executive Director Anna Norton said. “Together we are adding beauty, adding attractions, and bringing people together to #DiscoverAtmore.”

Those who would like to help offset the cost of production for the mural and green space, contributions can be made to the chamber on behalf of the American Legion.