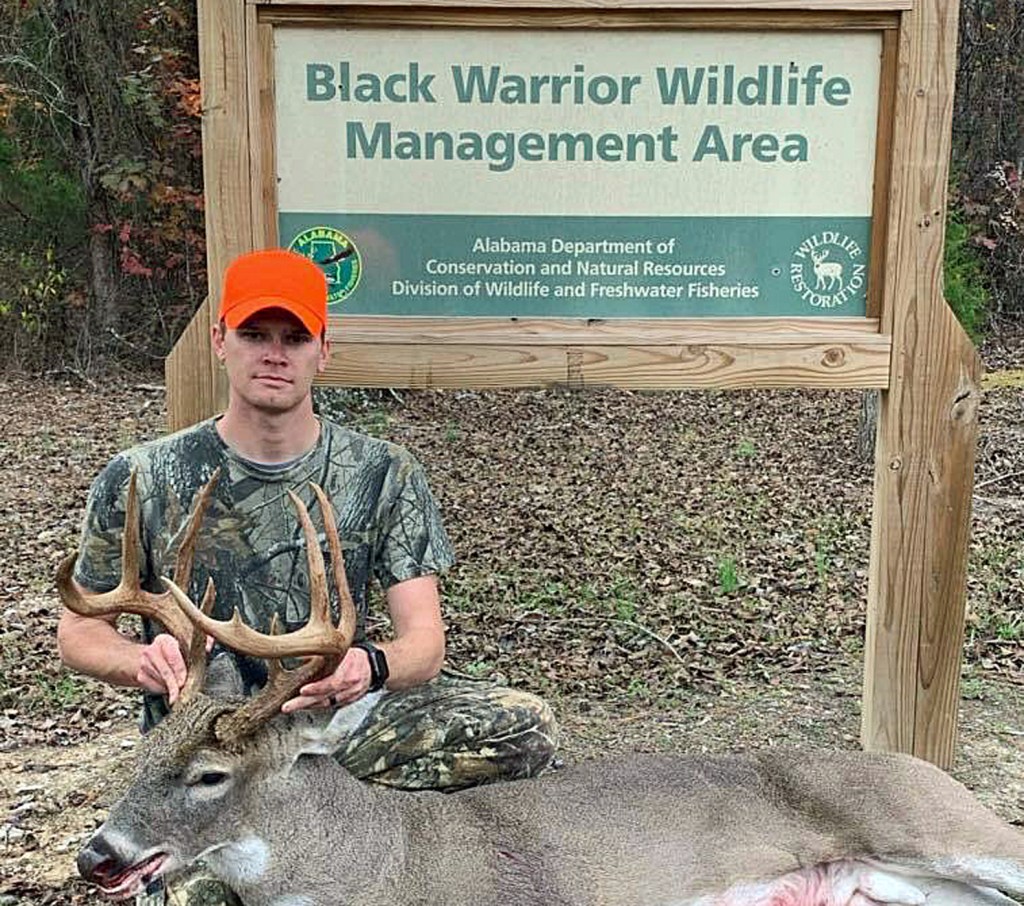 Most people think the rutting activity of white-tailed deer in Alabama occurs mostly in January and into February. However, if you’re willing to travel, hunters can take advantage of the rut in the state from mid-November through early February.

Plus, you can hunt the rut during that lengthy period on public land, according to Chris Smith of the Alabama Wildlife and Freshwater Fisheries (WFF) Division.

Early in the 20th century, Alabama’s deer herd was extremely limited because of unregulated harvest. Most of the animals were in southwest Alabama, with isolated pockets throughout the state. Extensive restocking efforts were conducted, which included trapping and relocating deer from southwest Alabama, mainly from the Clarke County area, as well as bringing in deer from other parts of the United States. Deer were transported from Arkansas, Georgia, Michigan, North Carolina, Ohio, Texas and Wisconsin.

For the most part, the transplanted deer maintained their native rutting activity, which is why Smith, Assistant Chief in the WFF’s Wildlife Section, said hunters can find rutting activity in Alabama for most of deer season.

For the majority of the state, the deer rut considerably later in the season, and it was reasonable to extend the season dates to end on February 10. The seasons in Zone D and Zone E start early and end early.

“We’ve got WMAs in the Black Belt region, some in the Cumberland Plateau, some in the Tennessee River Valley,” he said. “We have a WMA in every physiographic region of the state.”

“One of the unique things to me and something that people are starting to realize is that the rut situation across the state allows somebody to hunt during rutting activity from the first of November until the end of deer season on February 10,” Smith said.

This year, Zone D in northwest Alabama and Zone E with areas in northeast and southeast Alabama opened the gun deer season for antlered bucks on November 7 and their season will close on January 27, 2021.

“For the first time, we had gun season and multiple gun hunts during the peak rut on those WMAs,” Smith said. “This year, the season opened November 7, and I keep getting emails with photos of some superb mature bucks taken on those two WMAs because they’re hunting during the rut.”

Despite the regular gun deer season closing on January 27 in Zone D and Zone E, the gun hunts on Black Warrior and Choccolocco end in December.

“We don’t have January hunts on those WMAs because a lot of those bucks have dropped their antlers,” Smith said. “We don’t want to have any hunts where people might shoot a buck thinking it’s a doe because it didn’t have antlers.”

Of course, white-tailed deer is not the only hunting opportunity on public land in the state.

“Several of our WMAs have fantastic squirrel and rabbit hunting,” Smith said. “One of the opportunities that is coming along through some habitat work we’ve been doing the last several years is we’re starting to see an increase in our bobwhite quail populations. That is something a lot of people would like to see.

“The habitat work involves converting commercial forests into longleaf pine forest. And we’re starting to manage some early successional habitat. We’re starting to see a response to that. We monitor quail covey calls. Although it’s not going gangbusters, in these WMAs where this habitat work is being done, we’re seeing an increase in the number of coveys each year.”

Smith said if anyone is hesitant about hunting on one of the WMAs or land available to hunting through the Forever Wild program, they can contact WFF personnel for advice.

“One thing people seem to be afraid to do is to give us a call,” he said. “I can’t tell you how many people I’ve talked to who just decided to call us one day. In that phone conversation, they’re kind of shocked that we could provide so much helpful information. That’s our job. I would encourage people who are interested in hunting our WMAs to call the district office or the WMA manager. Their jobs are providing hunting habitat and hunting access. Now sometimes they are busy, but don’t be afraid to ask questions.”

With new technology, a plethora of information about the public hunting opportunities is available, but Smith said nothing can replace boots on the ground.

“I hunt Hollins WMA for turkeys,” he said. “When I started hunting there, I wanted to learn the land. You can go and hunt, but, while you’re hunting, take the opportunity to learn the access points and terrain.

“And take advantage of map programs like OnX to do some desktop scouting. Look for the drainage ditch points and saddles. Look for a curve in a road or a curve in a creek. Then you can go on the ground and actually check those areas out. If you don’t know what to look for, pick up the phone and call.”

One thing about hunting public land, especially on weekends, is the likelihood that you will encounter other hunters, which means courtesy is paramount.

“If you go to an area you had in mind to hunt and see a vehicle parked there, go to plan B or plan C,” Smith said. “Have respect for the other users. If you do, you generally get the same respect in return. Take it slow, practice hunting safety and be respectful of your public hunting brothers and sisters.”

To hunt the WMAs, you’ll need a valid statewide hunting license, a WMA license, and either a printed WMA permit for the area you plan to hunt or registration on the Outdoor AL app on your smartphone.

“On the WMAs in District II, you also have to have a daily permit, either paper or on your Outdoor AL app,” Smith said. “Next year, that requirement will be statewide. You will either check in and check out with the Outdoor AL app or get a daily permit from one of the kiosks at the WMAs, fill it out and drop it in the box.”

For people who are still a little hesitant about hunting public land, Smith suggests planning a trip during the week instead of the weekend. Of course, you’ll have to check each WMA to determine what hunting is allowed.

“People who go to our WMAs during the week often have thousands of acres all to themselves,” Smith said. “If you’re new to hunting public land, go during the week, get your feet on the ground, do your scouting and have many, many acres to yourself.”

Visit https://www.outdooralabama.com/hunting/where-hunt-alabama for more information on hunting on public land.