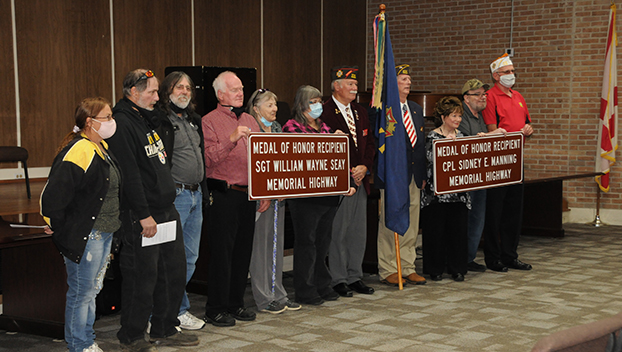 Escambia County’s Medal of Honor recipients were honored during a dedication ceremony Dec. 5 to name portions of Highway 31 between Atmore and Brewton.

The recipients, Cpl. Sidney E. Manning and Sgt. William Wayne Seay, were awarded joint resolutions by the Alabama State Legislature to name the portions of the highway after them. The heroes highway signs say “Medal of Honor Recipient CPL Sidney E. Manning Memorial Highway.” Seay’s sign says the same but with his name in the middle.

During the ceremony, both recipients’ stories were told. Manning served in World War I and Seay served in Vietnam.

Seay threw two live grenades back toward the enemy, saving those who were with him.

The dedication ceremony was a culmination of 2-and-a-half-years of work by Atmore VFW Post 7016.

VFW Commander Billy Gates said he didn’t realize then that Escambia County was home to the recipients.

“These two Medal of Honor recipients belong to Escambia County,” Gates said. “I said ‘I didn’t want this to be totally a VFW project. It needs to go countywide.’”

Gates said the VFW had to raise the money itself.

Gates said all of the money raised to pay for the signs came from donations across the county and even outside of the county.

A GoFundMe page was set up as well, he said.

“(The money) came in a little bit at a time,” Gates said. “Our former financial officer, Abby Brooks, would get checks in. It took a while, and our two politicians were real essential in this endeavour.”

Baker and Sen. Greg Albritton helped present the legislative resolution sign unveiling. During the ceremony, the signs presented were replicas.

In addition to VFW members and Atmore citizens, family members of both recipients were present for the ceremony.

Lynda Darwish, a niece of Seay, said she still has pictures of being on her uncle’s knee.

“This is awesome,” Darwish said about the ceremony. “For him to still be recognzed after 50 years is just amazing.”

Darwish said before Saturday she had only heard part of her uncle’s story.

“We actually didn’t hear what the story was,” Darwish said. “We heard part of it in 1980 when a parade in Ft. Bragg was dedicated. A two-star general told us he was one of the people my uncle saved.”

For Manning’s granddaughter, Myrtice Manning Dixon, the ceremony was wonderful.

“I am just so appreciative of what they’re doing,” Dixon said. “Hollywood came and wanted to make a move of granddaddy. He refused and said he didn’t want to do anything. He said he ‘wasn’t no hero. The ones that passed and didn’t come home are the heroes.’ That’s when they made ’Sergeant York.’ They kind of paralleled granddaddy’s story.”

Manning’s great-grandson, Dearl Allen Dixon, said the experience Saturday was amazing for him.

“It takes people to do something,” Dixon, who served in the U.S. Navy, said. “It doesn’t happen on its own. What they did was truly amazing in and of itself. Both of these men that are being recognized; they deserve what they did.”