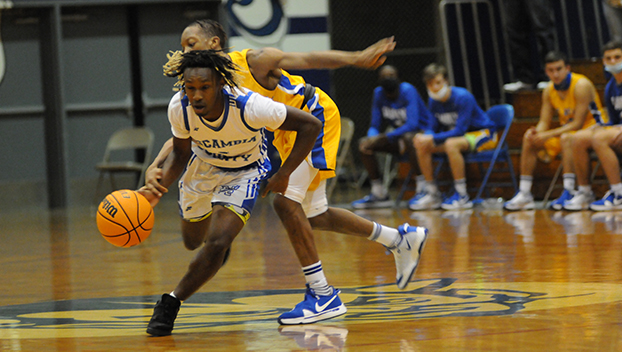 Escambia County and W.S. Neal had answers for each other, but the Blue Devils pulled away in a 60-50 victory Friday night during the boys county basketball tournament at Cornell Torrence Gymnasium.

The Eagles led 23-22 at the break after a close first half. ECHS led 11-9 after the first period.

Needing a defensive pick me up, the Blue Devils put together a good scheme during the third period. ECHS utilized its man-to-man defense and pressure to get a couple of turnovers.

“It kind of worked in our favor,” ECHS coach John Shears said.

Hakeem Johnson nailed a 3-pointer to start the third period, but a short time later, W.S. Neal’s M. Page hit a jumper to tie the game.

Stephen Williams answered with a turn-around jumper, and teammate Anthony McCants followed with a trey to put ECHS up 30-26 with 4 minutese left in the third.

Page, who ECHS couldn’t seem to stop, then got a 3-pointer with less than 2 seconds left to cut the lead to 38-35 going into the fourth.

Tyson Moore started the fourth with a 3-pointer, but WSN answered with a basket of its own.

Kaiden Arnold, a short while later, converted a jumper in the paint, and J. McCants answered for WSN with a roller.

Johnson then nailed a 3-pointer, Anthony McCants got a rebound and a lay up and Moore got a 3-pointer to put the Blue Devils ahead by 10.

ECHS took a time out, but gave up a turnover.

However, Williams got a key rebound and converted a jumper a short time later, and then Moore hit a free throw.

Sheldon Williams then dunked the game over.

“We pulled away after we hit some timely shots, and got a couple turnovers,” Shears said about the fourth. “We did pretty good at the free throw line. They’re a scrappy team. They won’t go way. With that No. 24 (Page) on the team, they’re going to stay in the ball game.”

WSN took an early lead in the first half, but ECHS bounced back to tie the game at 9-all with an answer from Johnson.

The Eagles went on 4-0 and 7-0 runs in the second period, and Sheldon Williams got a runner and a 3-pointer to cut it to one at the break.

The girls didn’t play tongiht because of contact-tracing issues.

Page had 17 points; J. McCants and A. Alvarez chipped in nine points each for WSN.