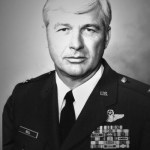 He was born June 3, 1944 in Century, Fla. to the late Leo Webb Nall and Elsie Earline Nall.

He was a graduate of Escambia County High School, the University of Alabama and Webster University. He retired from the Air Force as a colonel after a distinguished, 26-year flying and command career.

He is preceded in death by his parents and infant twin siblings, Graham Earl Nall and Doris Earline Nall.

He is survived by his wife of 54 years, Dianne Mullen Nall; by his son, Joseph Madison Nall Jr., his wife, Kathy, and their daughters, Anna and Molly; and his son, David Mark Nall, his wife, Marianne Kunkel, and their son, Arlo, and daughter, Zora. He is also survived by brothers and sisters, Webb (Frances) Nall, Robert “Bob” (Jan) Nall, Elsie (Walt) Butler, Merrill (Angela) Nall and Polly (Doug) Watkins; and numerous, beloved nieces and nephews.

In lieu of flowers, donations can be made to the American Parkinson Disease Association (apdaparkison.org).