Two Atmore women and a male were arrested Dec. 17 on receiving stolen property and fleeing and eluding charges, according to the Escambia County Sheriff’s Office. 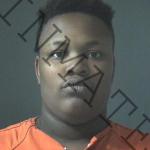 Sheriff Heath Jackson said Angelia White, 18, was arrested with reckless endangerment I, receiving stolen property I and fleeing and eluding I. He is being held at the Escambia County Detention Center on a $100,000 bond.

Arion Williams, 21, was charged with receiving stolen property and given a $100,000 bond, Jackson said.

Jackson said Deontae Hudson, who was also with White, is being held in the Escambia County, Fla. jail pending extradition back into Alabama to face charges.

Jackson said on Dec. 17, ECSO deputies attempted to conduct a traffic stop on a white Hyundai sedan traveling on Tumbling Lane in the Canoe area.

“The vehicle matched the description of a car that had been used in several burglaries,” Jackson said in a release. “After the deputy activated his lights and sirens, the vehicle fled at a high rate of speed in an attempt to escape law enforcement. The chase continued onto Highway 31 then onto the Florida Highway.

“The vehicle later attempted to turn on to Old Bratt Road, where it struck a power pole and was disabled,” he said. “The driver, Angelia White, was taken into custody along with Arion Williams and Deontae Hudson.”

Jackson said the arrested stemmed from numerous burglaries that took place in Escambia County, Ala.

“More charges are expected as investigators continue to identify other burglaries that were committed,” he said.