An Atmore man was arrested Dec. 18 on an attempted murder charge, according to police officials. 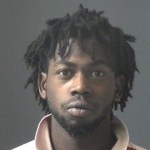 Chief Chuck Brooks said Tuesday morning that at approximately 12:04 a.m. on Dec. 18, police officers responded to the 500 block of Bragg Street, just off of MLK Avenue, in response to an individual who had gunshot wounds.

Brooks said officers arrived on scene and made contact with Lagarick Black, 23, also of Atmore. He said Lagarick Black was on the floor with what appeared to be several gunshot wounds.

Brooks said a suspect was immediately identified at the scene and subsequently arrested the same morning.

“They had been at the apartment for several hours, and he got a gun and started shooting,” Brooks said. “The victim said he started looking at him funny.”

Brooks said there wasn’t an indication as to why Travis Black began shooting.

Brooks said alcohol was noted inside the home.

Lagarick Black was transported to Atmore Community Hospital, and later lifefligted to a hospital in Mobile, Brooks said.