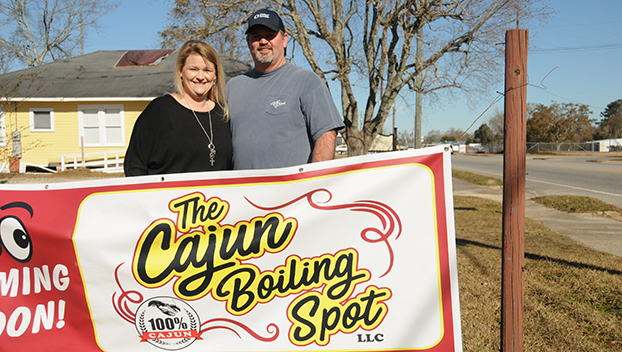 Soon, crawfish and shrimp lovers will have an opportunity to dive into the culinary delights at The Cajun Boiling Spot.

The new restaurant, located at 309 N. Main St., has been under construction for some two months, and Owners Paul and Michelle Uriegas said for right now, the eatery will be a drive-through only, adding that they wanted to provide something different in Atmore. The entrance will be on Trammell Street, and patrons will drive through and exit out on Main Street.

Michelle said there will be daily lunch specials offered.

Michelle said the drive through is phase one, and they’re hoping in the near future to have phase two completed.

“We’re hoping in the spring to add on to this side (Main Street) to have an outside sitting area,” she said.

Opening a cajun-themed restaurant isn’t anything new to Paul and Michelle as they opened Julio Boudreaux’s, a food truck in 2016.

Paul, a Forked Island, La. native, learned the way of what he calls coonass cooking, from his mother, Vickie.

“I loved watching my mom cook,” Paul said in a 2016 article. “She cooked everything from Mexican food to coonass food; to all kinds of stuff.”

When asked what coon-ass food is, Paul said it’s basically gumbo, po-boys and etouffe, among other food.

A welder by trade, Paul said he’s been looking to get off the road and open a restaurant. He’s been a welder since 2006.

“He loves to cook and wants to get off the road,” Michelle said. “We jumped all in on this one.”

Michelle said hours are undetermined at present, but the restaurant will be open for lunch Monday through Friday. Friday nights will feature a cajun special.

“We’ll have a boiled crawfish and shrimp every night,” Michelle said.

Frozen food will be available anytime they’re open, she said, adding that one day they hope to have fresh live crawfish for sale.

“It feels pretty good to get this thing going,” both said.