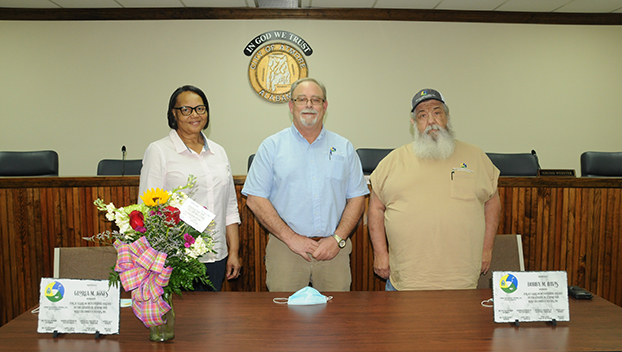 For a combined 80 years, Gloria Jones and Bobby Davis have been a part of the West Escambia Utilities family.

On Dec. 31, 2020, both handed in their keys for retirement, signifying a long and fruitful career at WEU.

Smith added he has been fortunate to work with Jones and Davis for the last 30 years.

Davis summed up what the environment is like working at WEU.

For his retirement, Davis said he has plans to do something else, but didn’t reveal his future intentions.

Jones said she still has a lot of activities she’s involved in, including the Concerned Citizens of Atmore, the flower club and as the financial secretary at her church, New Pleasant Hill Baptist Church.

One of three sisters, Jones said the biggest thing she’ll be doing is helping take care of her mom.

“I have a lot of things I’m already involved in I haven’t been able to give my full attention to,” Jones said. “For the last year, I haven’t had any attention because my mother’s been sick. I’ve lost a sister, and I help take care of my mother.

“My sisters and I are taking care of our mother,” she said. “Other family members pitch in, too.”

Jones said she also has two grandchildren who are active and keep her busy, too.

“I’ll have my hands full,” she added.

In regard to special memories, Jones said the family atmosphere that came with the job from former longtime employees Jesse Caraway (superintendent); Ellis Bryars; Jerry Kircharr, waste water manager and superintendent; and Tony Albert, manager. Davis echoed Jones when asked whether he thought he’d work at WEU for this long.

“This place is more like family,” Jones said. “I can remember when there were people with us like Jesse Caraway, Ellis Bryars, Jerry Kircharr – they’re deceased now – but I remember when I came to work here, people like that made you feel welcome.

“They didn’t say a whole lot, but what they said it had volume to it,” she said, quipping that they all kept Davis in line. “They didn’t have too much to do with me.”

Both have worn many hats while working at WEU.

Jones has been a utility clerk, working mainly in customer service and collections.

Davis began as a laborer under Caraway, adding that to this day he owes everything to the former superintendent.

Davis also worked in customer service, cut customers’ water on and off and checked for any water leaks and discolored water.

Both said they’ve encountered many people who have expressed their anger over their service getting cut off due to non payment.

Davis said the office staff, which he considers as family, too, provided a good sounding board so he wouldn’t take all of the aggrevation home.

When asked if she thought she’d be at WEU for 37 years, Jones said one can’t think that far ahead.

“I was raising my children then, and all I was concerned about was finding a decent job to be able to take care of my children, and put them through school,” she said. “I thank God I have been given this job.”

Davis said when he started, he thought it was a short term deal.

“When you work with Mr. Caraway, and with Mr. Albert, you grow to love them,” he said, adding that Caraway would treat his workers like they were his own children.

Davis, who has a long beard, quipped that believe it or not one couldn’t have a beard while working at WEU.

“Over the last year and a half, especially when the corona got kicking up, I let it go,” he said.

“Year and a half?” Jones quipped.

Davis said he stayed on because he gained a tighter bond with Caraway.

“You make a bond that’s unbreakable,” he said. “I got to the point I wanted to say with him. I was with him when he took his last breath. That was a hard day.”

When asked if there are any special memories they can take with them, Jones recalled the Christmas parties the office would throw.

“I remember when they were small,” Jones said. “They meant more when it was more or less employees and we would hang out together for that one time a year. We used to have picnics. Our kids would play and get to know each other. Those were the fun memories to get together and not working.”

In fact, the WEU office celebrated Jones and Davis Dec. 30, closing the office door and service window for more than an hour.

Smith said that’s unheard of for his working family.

Davis said a special memory he had was having the Christmas party in the old quonset hut after the office closed for the day.

“We’d fellowship good over there,” he said. “We had a lot of highfalutin people. I’ll just leave it at that.”