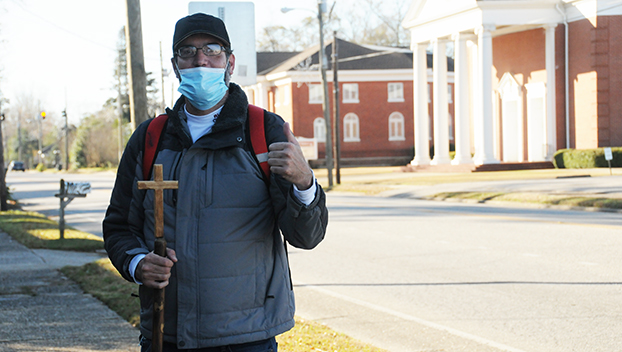 Lexington, Ky. man walking across the country, made stop in Atmore

A Lexington, Ky. man made his way through Atmore Jan. 4 during a journey the walking missionary said was inspired by making sure the country keeps God in its everyday life.

“I was working a job at Kroger and I was at home and was like, ‘Lord, what is the best way to reach out to this country?’” Jones said. “I kept hearing about how people have been taking God out of their daily lives, and not even praying over their supper and just going.

“People are just pushing God out of their lives,” he said. “I said, ‘Lord, how can I reach out to people? What’s the best way?’”

Jones said the answer came to him quite cearly.

“He (God) said, ‘I want you to drop everything and go,’” Jones said. “I quit my job, paid my roomates off every dime I had, and left with nothing but the clothes on my back.”

Jones said he’s been blessed as he’s not had to sleep outside one time and never went hungry because of donations from people and churches along the way. He added that he’s took on construction jobs and other work to help fund himself.

Walking a long distance isn’t anything new to Jones.

Some four years ago, his parents and his grandmother passed away in the same year.

Jones said he walked his first 800-mile walk then.

Throughout his current journey, Jones has had to utilize back and country roads. He said he can’t walk along the interstate, and has had to take the long route to get where he’s going sometimes.

Jones said he tracks his mileage by memory.

“I literally have the memory of an elephant,” he said. “I can go back and replay every step, like a movie in my head.”

Jones said he doesn’t walk at night, and if he needs to get a ride from someone, he’ll deduct the ride off of the journey.

Jones said he’s gone through three pairs of shoes so far on the journey. He said a man from Enterprise bought him a pair and a new jacket. An opthemologist from Opp helped him get new glasses, he said.

“I intend to walk across the country and keep going back and forth until I bring as many peolpe to the Lord as I can,” he said. “When I get to California, I intend on writing a book on my travles. Then I intend to go back and forth because I have no kids, and I have never been married. There isn’t anything stopping me.”

Jones said he stayed in Atmore on Jan. 4, and then was heading toward Bay Minette for the next part of his journey.

“It’s been awesome,” Jones said about the journey. “Spiritually, it’s been amazing. Even though the pandemic hit when I got to Athens (Ga.), it slowed me down a little bit because churches were shut down. I was able to push through and find work, and just stay in motels and everything else. The only hard part about it is that I had to walk through drive thrus of restaurants.”