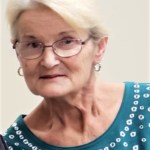 As a child, she attended Davis School in Davisville, Fla. and Earnest Ward in Walnut Hill, Fla.

Being one who was called by her Daddy as his “China Doll” because of her beauty, the name stuck and still today is lovingly known as Doll.

She went on to marry Terry Elkins and birthed two daughters, Erica (Donald) Little of Atmore and Kimberly (Rodney) Johnson of Perdido.

The children really didn’t stop there as every one of their friends adopted her as their mother, also calling her “Mom.”

She has a host of nieces and nephews (of course she did, with 18 siblings!) and her close friend Peggy Moore of New Castle, Ky. had eight children who adopted her as their aunt also.

She went by the name of Diane, who in a child language sounded like Di-nan. From that came the nickname Nanny. The name stuck when the grandchildren started to come along.

With the second marriage of Erica, she was able to gain another grandchild, Kerven (Casey) Little of Pensacola, Fla.

After living in Kentucky for over 30 years, she retired and moved back to her hometown of Atmore, where she was a member of Nokomis Baptist Church.

Her passions aside from spending time with her grandchildren and great grandchildren involved gardening. She often tended to her vegetable garden and multiple fruit trees and flower beds. In the yard was where she felt at peace. Now, as of New Year’s Eve, her peace is found in the arms of her Lord and Savior.

The funeral will be held today, Wed., Jan. 6, 2021 at 10 a.m. Her pastor James Hill will be officiating the service. The burial is to follow the service at Serenity Gardens in Atmore.