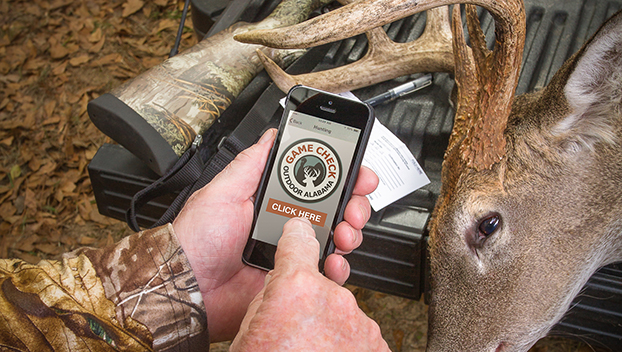 The toll-free Game Check phone number, 1-800-888-7690, is back and better than ever. The Alabama Department of Conservation and Natural Resources (ADCNR) has reactivated the number for hunters to comply with the reporting requirements for the harvests of white-tailed deer and wild turkeys.

What makes the reactivated number better is that hunters who use this method will talk to a live person at the call center that is open 24 hours a day, 7 days a week.

Chuck Sykes, Director of the ADCNR’s Wildlife and Freshwater Fisheries (WFF) Division, said the 800 number had been deactivated because of the faulty data it produced under the previous format.

“We had the IVR (interactive voice response) for the first couple of years of Game Check, where the computer took people’s information,” Sykes said. “The data we were getting through that system was faulty and was costing a fair amount of money, so we chose to eliminate that option.”

Hunters were urged to use the Outdoor AL app on their smartphones when possible. Harvests could also be reported at www.outdooralabama.com.

Sykes said WFF officials have allowed hunters to call in harvest reports to district offices this year if they did not have internet access or had trouble with the Outdoor AL app.

“Compliance with Game Check has definitely gone up this year, and we felt it was the right thing to do to give hunters that third option again,” he said. “But we were not going to waste time, money and energy on a computer system that would produce bad data.

“Now we have a 24-7 live operator who can help people Game Check their deer. It’s a more customer-friendly experience, and it gives us the data we desperately need.”

Amy Silvano, Assistant Chief in the WFF’s Wildlife Section, is in charge of the 800-number system and saw immediate use of the phone option.

“In the first 24 hours, 172 people had utilized it,” Silvano said. “And, I want to point out that this is not a new number. It’s the same Game Check number from before. We just switched from an IVR to a call service. So, it’s not a new way to report it.

“We had problems with the original system. We weren’t getting all the data we needed. We might get the date of harvest, but sometimes that was it. It was prompting through, allowing for the confirmation number, and we weren’t getting good viable data. Now you will have a live person on the line, and they will walk you through the reporting system.”

Silvano said the viable data include overall harvest per county and date of harvest. That provides WFF officials with a look at the harvest throughout the season.

“The date of harvest allows us to determine the peaks and bounds of harvest, and the county data allows us to look at the distribution of harvest across the state, because we do have multiple zones,” she said. “That information, along with our rut map, helps us define the zones as well as the timings of the seasons that we recommend.

“Overall, our harvest data is our population metrics. We can look at the transient harvests. If our harvest is going down in certain areas and our hunter numbers are being maintained, we know something is going on in the population that is not attributed to hunter activity. That could mean there is not enough deer for them to harvest. The same holds true with turkeys or any other game species. We would expect if hunters are declining, the harvest would also decline at the same rate. The overall data allows us to look at that. With the county data and date of harvest, we can look at the localized scale at zone levels.”

Silvano said the county data with dates of harvest allows WFF officials to determine the season dates for each zone that offer hunters the best time to be in the woods during peak rutting activity.

When hunters call the 800 number, they will first hear a recorded message prompting them to have their information ready before speaking to an operator. Callers must have their Conservation ID or ADCNR hunting license number to begin the reporting process with the live operator, who will input the data from the harvest.

Exempt hunters can especially benefit from the 800-number option, according to Silvano.

“With a live person on the line, it helps hunters, especially hunters who are license-exempt,” she said. “The operator can go into the system and generate a HELP (Hunter Exempt License Privilege) or Conservation ID (CID) number and check the deer or turkey for them. This provides a lot more benefit than a recorded system did. We can assure that all the data is being collected. The call center is entering the information into the system like it was the hunter.”

Silvano said the smartphone Outdoor AL app (version 1.3.2 or higher) continues to be the most frequently used method to report harvests at 77 percent, followed by online at outdooralabama.com.

“The 800 number is working as planned,” she said. “The good thing is the number is the same, so people who used the phone system before will have access to that same number.”

Reporting is still required within 48 hours of any deer or turkey harvest or when possession of the deer or turkey is transferred to a processor, taxidermist or another individual.

“When we updated the possession regulation this year, it caused the compliance to go up,” Sykes said. “To make it easier on the processors, taxidermists and folks who don’t have a smartphone or internet access, we felt it was a wise use of our resources to reactivate the 800 number. But the most important thing is that we get quality data.”

The possession regulation Sykes referred to applies to deer and turkey. Whoever is in possession of all or part of a deer or turkey that is not their own must retain written documentation with the name of the hunter, the hunter’s Conservation ID number, the date of the harvest and Game Check confirmation number. The information can be documented on a piece of paper, or a transfer of possession certificate is available in the Alabama Hunting & Fishing Digest or online at outdooralabama.com.