Myra Jean Stanton Holt, 89, a lifetime resident of Century, Fla., passed away on Jan. 17, 2021 at the Century Center for Rehabilitation and Healing in Century, where she resided since June 2019. 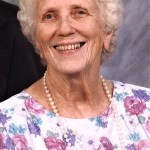 Myra Jean was born in 1931 in Century to Vivian Earl “Bubba” Stanton and Esta Ellen Toomer Stanton. She graduated from Century High School in 1949.

She was a devoted, loving wife, mother, grandmother and great-grandmother. She accepted the Lord as her savior at the age of 14. She loved her Lord and served as a Sunday School teacher and church pianist for many years.

She had the heart of a servant, which showed through her actions of humility, love and compassion during times she cared for her family and friends. She loved caring for people so much that she became a practical nurse and worked for two years at the Turberville Memorial Hospital in Century under Dr. Thomas J. Stewart.

She was loved by many and some considered her their second mother. She will be greatly missed.

She was preceded in death by her parents; one brother, Vivian Earl “Kayo” Stanton Jr.; and two great-granddaughters, Tomi Faith Holt and Karsyn Faith Yeager.

A private graveside service for the immediate family will be held at the Flomaton Cemetery today, Jan. 20, 2021. Her son in law, the Rev. Steven Whitmore will be officiating.

In lieu of flowers, donations may be made to The Flomaton Cemetery Perpetual Care Fund in care of Escambia County Bank, P.O. Box 601 Flomaton, AL 36441.

We thank the staff of the CCRH and VITAS Hospice for caring for her.