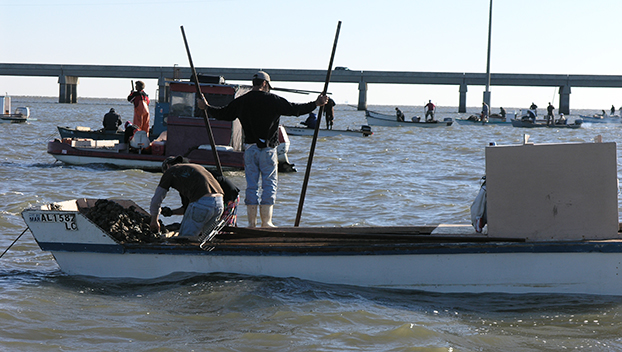 Alabama's oyster harvest for the 2020 season totaled 22,000 sacks, which was double the 2019 catch. Oyster catches took advantage of the rebounding oyster production along the Alabama Gulf Coast. The half-shell market was impacted by COVID-19 and the restrictions on sit-down dining. | David Rainer photo

Harvest numbers for the 2020 Alabama oyster season, which ended on December 23, indicate the state’s oyster ecosystem is bouncing back in a big way.

That 2020 harvest of 22,000 sacks doubled the previous year’s harvest, thanks to improving conditions and a new method developed by the Alabama Marine Resources Division (MRD) to determine when and where oysters could be harvested.

“I think it was a very successful season,” said Colonel Scott Bannon, MRD Director. “We think we are turning a corner on the things that we can control, which is the amount of harvest and the areas harvested as we work to rebuild our public reefs. As long as environmental conditions are favorable, I think we’re going to continue to see growth. With as many as 144 (oyster) boats on the water during a day, there was a lot of bottom that was turned, which is healthy for that reef by exposing shell and cultch material. When you don’t have harvest on a reef, you’re not exposing shell that may have been silted over. When you expose that shell and cultch material, it makes it available for spat (oyster larvae) to attach for future seasons. It’s that harvester’s circle. You work the reef; the spat sets and the reef expands.

“A lot of benefits came out of the harvest we had. It was a financial boost to the local economy, but also for the rest of the state and other areas that were receiving our oysters. It was a very desirable product.”

Bannon said the demand for Alabama oysters was high, not only because of their quality, but also because the only other Gulf state with a fully open oyster season was Texas.

“It was a high-value product for a limited availability due to COVID,” he said. “COVID still had a negative impact on the oystering because there are still places around the country that are not open to sit-down-style dining. That’s where oysters generally are consumed in the half-shell market. The quarts and gallons of shucked oysters still had a market in stores, but COVID did have an impact.”

Dana Harbison Taylor at Anna’s Oysters in Bayou La Batre, which has been processing oysters for 28 years from sources around the Gulf of Mexico, said the 2020 Alabama season was a welcome success despite COVID.

“This year I saw more boats, so more people were interested in catching oysters,” Taylor said. “And I saw larger oysters than last year, which means the oysters are growing. Also, I could also tell by how fast the oyster catchers were coming in. It shows how many oysters were there. They weren’t scratching, as we call it, trying to find oysters. They were catching them pretty fast. When the season kicked off in October, some of the seasoned catchers would be pulling up to the docks within 45 minutes to an hour. It was unreal how fast they were coming in.”

Taylor said the demand for Alabama oysters was excellent for a variety of reasons.

“People had a lot of interest in Alabama oysters because they have a meatier texture, so they were fatter,” she said. “They were salty. They have an all-around different taste. We have a lot of locals and businesses that requested Alabama oysters. We had a truck waiting on the catchers to bring the oysters in. We were determined to buy Alabama oysters.

“And the catchers were telling me the reefs are loaded with oysters. They said there were oysters everywhere. I think it’s awesome.”

Bannon said the development of a grid system for management of the oyster reefs allowed MRD to be a great deal more flexible in opening and closing areas to harvest.

“Last year, during the season, we had some areas where harvesters were concentrating and probably overworking,” Bannon said. “But we felt there were other areas with harvestable oysters (at least 3 inches in length) they were not accessing, and we didn’t have a mechanism to close portions of areas we had open. We developed a grid system with 500 by 500 square meter grids so we could open and close those grids. Now we can use the grid system to narrow the areas of harvest.

“That does multiple things. It gives us an idea of specific areas where people are harvesting, which helps account for the oysters that are coming off the reef. We can then compare that area harvest to our preseason surveys and make season adjustments.”

“That gave the harvesters an extra 4,000 sacks from that area,” Bannon said of the sack measurement that equals a bushel basket. “Some people are saying we’re using the grids to exclude them from harvesting in certain areas. That is true once they have worked to what we feel is the optimum yield. But we also use it to open areas where we think they will have additional opportunities for harvest. We feel like it was pretty successful.”

Oyster harvesters can go to www.outdooralabama.com/fishing/saltwater-fishing and look for the Oyster OMS Grid Map tab. Once there they can turn on location services, which will show the harvesters which grid they are in at the time. If harvesters don’t have a smartphone, MRD has an oyster management trailer available to provide graphics with the latest information.

“Marine Resources does not gather any information from those location services,” Bannon said. “We do not see the location of the oyster catcher from the website. We’re not tracking people. It’s there for the catchers’ benefit, and some of the catchers really liked it. They were able to move around. Some of them were really able to take advantage of it. I think it was a very effective tool to allow them to harvest maximum yield.”

MRD determines maximum yield by doing preseason dives and surveying one-square-meter blocks of the bottom to determine the oyster density and viability of the oyster habitat.

“We take everything from that one square meter and determine how much cultch material is there and how many live oysters are there from spat stage to undersized to harvestable oysters,” Bannon said. “We use that to determine how many sacks are available in an area. This year, we estimated that we could harvest around 19,000 sacks. During the season, we watched where people were working. We sent staff out to see them working on the reefs and conducted additional surveys, which allowed us to expand from 19,000 sacks to 22,000 sacks.”

Despite the encouraging results of the 2020 oyster season, MRD is working to revive some oyster reefs that have not been productive lately.

“Environmental changes have impacted the traditional oyster beds in Mobile Bay,” Bannon said. “We are working on some restoration projects. We’re looking at elevating the bottom in some of those areas because there is low dissolved oxygen on the bottom, and the oysters can’t survive. Once you elevate them in the water column, they have the potential to survive. We have a project called mounds and furrows, where we have piled shells and gravel in different fashions to get it higher in the water column. We will survey those areas to see if the spat is adhering to that material and surviving because the oxygen levels are higher. We will also be expanding our hatchery in Gulf Shores (Claude Peteet Mariculture Center) to produce oyster larvae to be delivered to an expanded program at Dauphin Island, where we place that larvae on shell. Those shells containing small oysters can then be used to revitalize some of the historic oyster reefs.

“Oysters are important, not only for harvest – we all enjoy that – but they are critical to the ecosystem. They are crucial for water quality, and they are important as a food supply for some of the other marine species. You need a good supply of oysters to have a healthy harvest and a healthy ecosystem.”