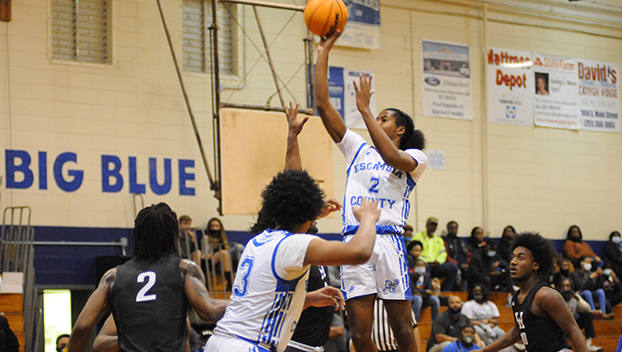 Williamson’s Justin Brown scored 14 of his team’s 32 second half points to help lead the No. 1 Lions to a 54-50 area victory over Escambia County Friday night.

Brown his four 3-pointers in the third period, giving his team a four-point advantage going into the final period of play.

Escambia County led 26-22 at halftime with the aid of a strong first period. The Blue Devils went on a 10-0 run early and led 17-7 going into the second.

“I thought my kids played well,” ECHS coach John Shears said. “We talk all the time about those last 2 minutes of each quarter. It’s like a whole nother quarter for them. We had a chance to go up 12 before the half, and we went up four and had a chance to go up at least by seven. We missed free throws right there.”

With the loss, the Blue Devils fall to 9-10 overall, and 4-2 in Class 4A, Area 1. ECHS has two more area games, a road contest against Vigor next Tuesday, then another at St. Michael.

Earlier this week, the Alabama High School Athletic Association announced changes to the championship program because of the pandemic for winter sports, including basketball.

The top two seeds in the area tournament will host the semifinal round. The Blue Devils will need to win their next two area games to earn the No. 2 seed.

Sug regionals will be played Feb. 16; regional semifinals are slated for Feb. 19 for boys with the regional finals on Feb. 22, according to AHSAA officials.

In the fourth period, a back and forth contest ensued.

Sheldon Williams and Hakeem Johnson got easy buckets early to cut into the lead.

Brown added a jumper after a baseline dunk from Jordan Bell to put WHS up 44-40.

WHS increased its lead thanks to a rebound and putback by Robert Woodyard.

However, Johnson answered with a 3-pointer to cut it back to four with less than 4 minutes left.

Williamson held its lead the rest of the way, and Tyson Moore nailed a late 3-pointer to bring the game back to four.

In the first period, Moore lit up the court with three 3-pointers during the early rally.

“We’ve got to continue to work on it,” he said. “We played the defending state champions. They had a lot to do with it.”

Brown led WHS with 19 points, and Bell contributed with 16 points.