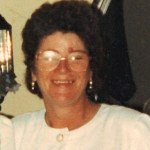 She was born on July 11, 1943 in Georgiana to Obie Leon and Eva Lucille Jernigan Cobb, and was a seamstress most of her life.

She is preceded in death by her parents; and her son, James Leon Pettie.

She is survived by her sons, William R. Pettie of Brewton and Thomas Wilton Pettie of Brewton; her daughters, Patricia Diane (Randy) Williamson of Land O’Lakes, Fla., Deborah Faye (John) Flournoy of Autaugaville, Darlene Pettie Anthony of Brewton and Delanor Dale (Richard) Odom of Bay Minette; her brother, William Cobb of Georgiana; her sisters, Shirley Green of Georgiana and Opal Cobb of Georgiana; 11 grandchildren; numerous great-grandchildren; and one great-great grandchild.

A memorial service was held on Jan. 20, 2021 at Georgiana Pentecostal Church.