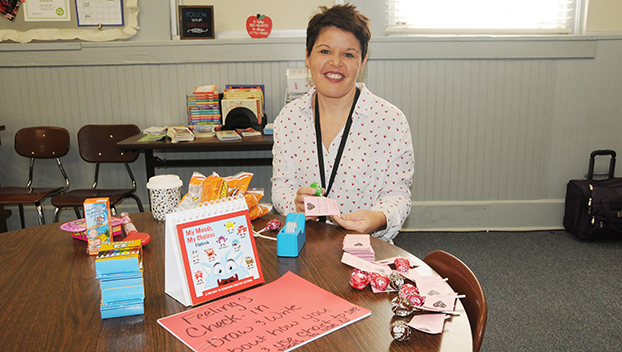 Huxford Elementary School Counselor Rebecca Murray is shown Jan. 29 inside of her classroom getting ready for a new week of helping students. | Andrew Garner/Atmore Advance

Murray began counseling with students near the tail end of the 2016-17 school year at the former A.C. Elementary School. She has been in education for 11 years and has worked with all ages of students. Additionally, she has master’s degrees in psychology and school counseling.

Murray said she got into counseling because she wanted to make sure every child was being taught the same and to help those who might be having trouble.

“We had counseling classes each month,” Murray said. “I really got to thinking about it, and when the position came open at A.C. Moore, I told (former Principal) Mr. (John) Brantley that ‘I think I want to apply to the position.’ It’s been great ever since.”

This week, the country is celebrating National School Counseling Week to focus public attention on the unique contribution of school counselors within the school systems, according to the American School Counselor Association’s website.

Murray said she likes the colaboration she has between student, teacher and administrators to find a way to help a student.

“You’d be surprised on a daily basis how many students might be sent to you in a day,” she said. “The teacher might even need support. It’s an all-around thing.”

Murray added that she serves on many different teams at HES.

A typical day for Murray begins with morning duty, where she greets students getting off the bus or out of their parents’ cars. She said she tells each “Good morning! And have a great day.”

“Then we come in and have morning announcements,” she said. “From that point, I like to go around and see the kids in the classrooms. I isolate a few in each, just to see. You can tell by looking at a child’s face how they’re feeling that morning.”

Murray said she then checks attendance for the school, and then sees kids who’ll come on a weekly bases. Sometimes she counsels to groups of students.

Murray said she deals with a range of things, from helping a student with a recent loss in the family or helping another who says their friend doesn’t want to be friendly anymore.

She said the students are safe to talk with her about anything that may be causing an issue.

Murray said the most rewarding aspect of her job is when she goes into the classroom and the students pick up on a concept she taught them previously.

“They’ll say we already know that, and we talked about it last time,” she said. “Or let’s say I have a student having meltdowns. We work really hard with them, and to see them come and talk abou it instead, to me that’s the greatest thing. Knowing that I made a difference is the extra reward.”

Murray said the COVID-19 pandemic changed a lot with her job, but it’s an occupation she wouldn’t trade for any other job.

“Right now it’s so hard because they want to hug you, but you can’t hug them,” she said. “They tell you ‘I love your earrings,’ or ‘I love you so much.’ They’re expressing their feelings.

“I look back now, and I’ve been here since A.C. Moore closed,” she said. “The students I’ve had since kindergarten are now in the second or third grade. It’s just amazing to see how great their behavior looks when I start pulling their reports. It’s an accomplishment to me because I know the time I had with them and the lessons I went over with them.”