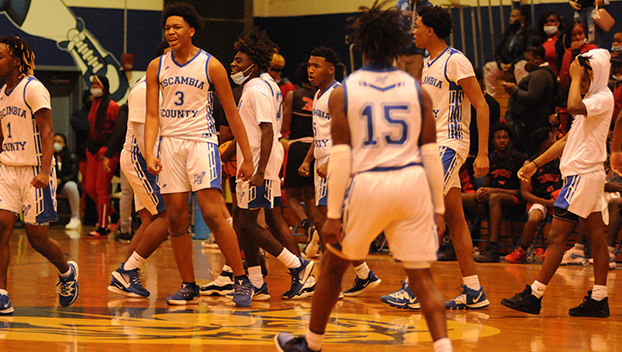 In a close game, every shot counts.

Escambia County outlasted Class 3A No. 4 Hillcrest-Evergreen 56-52 Friday at home on senior night, rallying late to hold off a late Jaugars surge.

Kaiden Arnold converted a 3-pointer, and Tyson Moorer hit a 3-pointer with more than 4 minutes left in the second.

Hillcrest came back on a 5-0 run thanks to some baseline turnovers to cut it to 20-17 a short time later.

Then, Jacobey James went coast to coast for a 24-17 advantage after Hakeem Johnson’s layup.

The Jaguars didn’t go away as they tied the game up on a drive to the basket from Kesharvis Jones. Beforehand, Camron Rudolph got a rebound and putback to give HHS a 26-24 lead.

Both teams went back and forth, never letting the lead differential get above five points.

In the fourth, the same story ensued, but at around the 5 minute mark, Escambia County’s Jacob Dirden provided a much-needed spark.

Dirden hit a 3-pointer to give the Blue Devils a 50-45 advantage, and got a block on the defensive end. He then found Stephen Williams for an easy conversion.

James made a crucial free throw with 7.5 seconds left.

The Lady Blue Devils will play in a play-in game at home against W.S. Neal for the area tournament. Tip off is at 6 p.m.