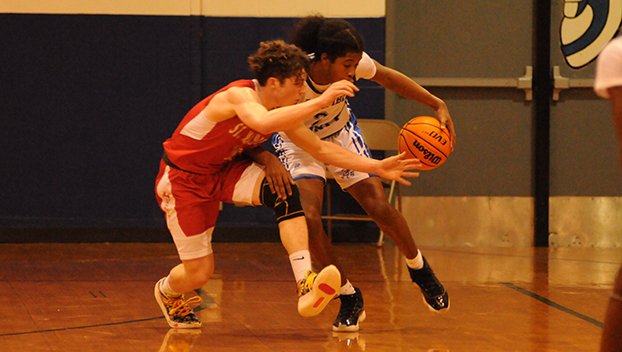 Escambia County defeated St. Michael 31-30 in a defensive battle tonight in the AHSAA Class 4A, Area 1 tournament semifinals in Atmore.

With the victory, the Blue Devils advance to the area championship, where they’ll face Vigor at home on Saturday. Tip off is at 7 p.m.

Going into the game, the Blue Devils were well aware of Caron, the Fairhope team’s best player.

With 2 minutes left, ECHS led 31-28. Jacob Dirden then got a steal for the Atmore team and shortly afterward, ECHS took a timeout with 41 seconds left.

Some 30 seconds later, Caron manages to get the ball and drives to the basket for a layup. St. Michael then took a timeout with 10.2 seconds left to talk things over.

On the inbound play, ECHS threw the ball around and ran out the clock.

Prior to the final buzzer, the Blue Devils missed a couple free-throw opportunities to make it a two-possession game.

“We passed the ball arond, and we wanted to get the free throw shooter, but the guy (Caron) made a heck of a play,” he said. “We are fortunate to seen another day.”

For the game, ECHS was 8-of-12 from the free-throw line. St. Michael didn’t visit the line at all tongiht.