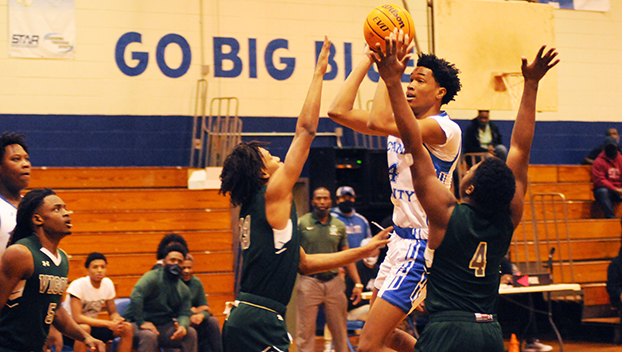 Escambia County’s Tyson Moorer hit the game-tying shot and Sheldon Williams made the go-ahead field goal and the Blue Devils held on late to beat Vigor 39-37 tonight in the AHSAA Class 4A, Area 1 championship.

With 24.5 seconds left, Moorer was in a one-and-one situation. He made his first, and missed his second. Williams then grabbed the rebound and made the putback for the go ahead bucket.

A few seconds prior, Williams, who finished the game with 15 points and 11 rebounds, grabbed a board off of a missed free throw.

The Blue Devils then took a timeout with 9.1 seconds left, and Vigor’s Larry Ruffin had a good look at the basket from the arch, but missed.

Drenched in a postgame water and gatorade bath, ECHS coach John Shears gave much respect to the visiting Wolves from Mobile.

Before the eventual game-winning shot, the Blue Devils trailed 37-36 with 1:27 left in the conest. ECHS had plenty of fouls to give, and it did.

“We had to revert to fouling,” he said.

Moorer had a chance to help seal the game with around 36 seconds left after a steal, but an out-of-bounds call gave the Wolves the ball back. The senior was fouled some 12 seconds later.

“Tyson had a chance to go back to the line and redeem himself, and he scored to tie and the next one Sheldon got an offensive rebound and putback,” Shears said.

Shears said Ruffin got a good look, and “fortunately we won.”

With the win, the Blue Devils earned a bye for the next round in the playoffs because Class 4A, Area 4 doesn’t have a runner up. ECHS advances to the southwest regional tournament, where it will face the winner of Holt at Fultondale. If Fultondale wins, the game will be played in Atmore.

Hakeem Johnson, who finished with nine points, hit a 3-pointer to give the Blue Devils an early fourth-period lead.

Stephen Williams, Sheldon’s brother, grabbed a rebound and putback a short tie later for a 36-33 advantage.

Vigor’s De’Vonte Harris, who hit the game-winning shot against defending state champions Williamson the other night, went coast to coast for a bucket and a 37-36 lead.

In the second half, the game was a back-and-forth affair.

Escambia County, who finished the game with 27 rebounds, controlled the glass in the second half, Shears said.

Earlier in the game, Johnson got a free throw, and went one end to the other to help give the Blue Devils a 18-14 lead.