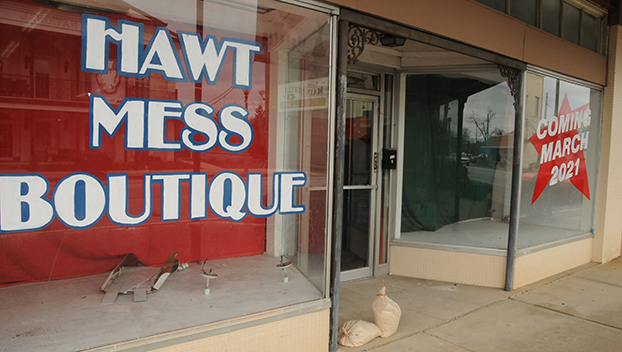 Smith began her business selling items out of her car in 2013, and then switched to the air stream between 2015 and 2016. She more recently sold items out of Tiger Lily.

“I’ve been doing this on the road, and started small with the air stream,” Smith said. “I helped Brandy (Turk Fehr, owner of Tiger Lily) get through cancer. I thought that it was time to move on and go to the next level.”

Smith said what drew her to the building were the downtown revitalization effort the Pride of Atmore is doing for the Strand Theatre and Old Hardware Store, and the fact that it offers more space.

Additionally, the owners were eager to have somebody in the building, Smith added.

Smith said another perk for her is that there is plenty of parking behind the building for her customers.

Smith said she’ll still be selling women’s clothing, but will also have tween clothes and shoes; a men’s line of T-shirts; engravable gifts; and other boutique gift items.

Smith said she’s already got an idea of the layout of her store, adding that the Andersons have allowed her to use some of the manicans and old racks that are in storage.

Smith said she’s hoping to open her new location by the first or second week of March. Set store hours have yet to be determined, she said.