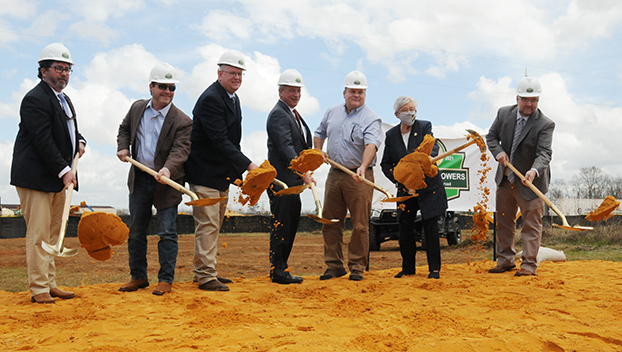 The project, an $87 million investment, is slated to employ 150 fulltime workers and will serve as an epicenter for peanute processing in south Alabama. More than 100 farmers will have ownership stake in the company, which was organized earlier this year as a cooperative to give state farmers and additional outlet for peanut shelling and increased profits from their crop.

“We’re here to celebrate a great vision to Atmore,” Ivey said. “As many of you already know, one of the highest priorities of my administration has been developing our workforce. While we have had a hard year, our economy is proving her strengths and we’re bouncing back.

The facility will sit on more than 60 acres inside of the industrial park, and will be served by a future railroad spur.

Centerfire Economic CEO and Escambia County IDA Executive Director Jess Nicholas said the governor’s commitment to economic development in the state has been a hallmark for her term as the state’s highest officer.

Nicholas said without the state partners’ help with this project, it wouldn’t have come to fruition.

Mayor Jim Staff thanked Ivey for her support on this project.

“This has been a great occassion, and without your support, we wouldn’t be here,” Staff said.

Hollis and Spann is serving as the general contractor for the project and is building approximately 400,000 square feet of enclosed space, which will house the shelling operations and provide storage. The facility will have the capacity to shell 30 tons of peanuts each hour.

Economically, the facility will have a big impact on both sales and output, and with the indirect and induced companie and jobs it will creat, is expected to reach $55 million each year.

Coastal Growers LLC President and CEO Dirk Lindsey said the facility will be the newest most technologically advanced facility in the world.

“It’s being built by some of the best of the best doing what they do best,” Lindsey said. “Hollis and Spann out of Dothan have a proven history. (Lewis M. Carter) out of Donalsonville, Ga., is the manufacturer of the best peanut shelling machines. Higgins Electric is providing the electric design of the facility, and is proven. TripTek Contruction, a local Atmore comapny, is doing all the dirt moving. Look behind me, their work speaks for themselves.”

Lindsey said the plant is designed to be one of the most efficient of its kind, producing the highest of quality product.

A couple of managing partners then spoke at the event.