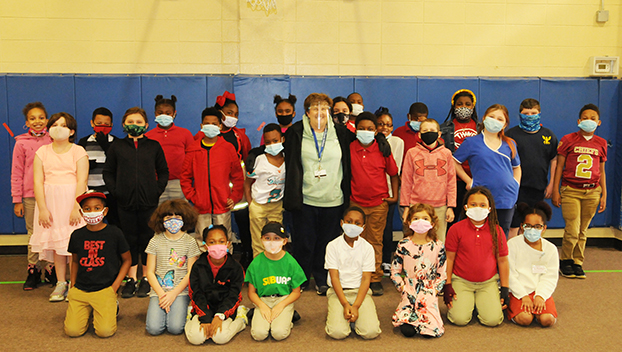 Shown is Tammy Smith with a bunch of her students during a recent PE class. | Andrew Garner/Atmore Advance

Tammy Smith is in the kids business.

For the past 37 years, the Rachel Patterson Elementary School physical education teacher has had the unique opportunity to touch and impact many lives.

Smith said the most rewarding part of her job is just being with the kids.

“When you get to work at a job where you can play all day, that’s a bright spot there,” Smith said. “We literally play all day. We have organized play. It’s like I always tell my co-teacher, JoLynn Godwin, who works with me and is amazing. She sparked new life in me. When she came to the gym five years ago, I thought, ‘should I retire or should I stay?’ She came from the classroom side of things, and we just have a blast.”

Smith, who grew up and has lived her whole life in Atmore, has an athletic background. Growing up, she played tennis and other sports, including softball.

She said she got into teaching because she loved working with the kids while as a lifeguard during summers when she came home from her studies at the University of South Alabama.

“When I graduated from South Alabama, I applied for a job here in 1984, and got the job,” Smith said. “I’ve been here ever since.”

Another aspect of the job that has helped Smith over the years is working with some great people, she said.

In addition to Godwin, Smith said she loved working with Joanne Bonds and Mickey Cannon.

“I’ve learned so much from all of them,” she said. “They’ve taught me a lot. I’ve ben very blessed to work with some awesome people.”

Being around kids for as long as she has, Smith sometimes notices a need.

There have been several times where the PE staff has pooled money together and bought shoes for those students who are in need.

“If she sees a need, she doesn’t talk about it, she administers to the need,” McMillian said. “For example, she teaches every student at Rachel Patterson every day. So, if one of her students needs something like pants or shoes, she uses her planning time to go to the store to purchase it with her own money. She has been doing this each year, since 2012 when I first started working at RPES.

“She never gets tired of giving to others,” she said. “The need has been so great this year due to the COVID-19 pandemic, but that hasn’t stopped Mrs. Smith.”

McMillian said recently, Smith provided a new pair of shoes for one of the school’s third graders.

“When he received the shoes, he couldn’t stop thanking her,” she said. “He told her how much he liked them, and now people wouldn’t make fun of his shoes. He also wrote her a thank you note the next day. Well, the next day, the brother had on the other student’s old shoes. She didn’t know that the students were brothers. She used her planning time to find out about all of the student’s siblings. Later that day, she asked if she could leave early to go to the store. She (and Godwin) returned with new shoes and socks for the student’s other two brothers and sister. Just this school year, she has provided shoes and uniforms to approximately 10 students.”

Smith added Godwin and herself pulled the money together to purchase shoes and clothes.

While Smith has been giving so much to the students over the years, it was during a recent time when she had breast cancer that her pupils gave back to her.

Smith said she hopes she’ll be able to do her job.

“I know eventually I’ll have to give it up, but I’ve been very blessed,” she said. “Even when I do retire if it’s next year, or in two years or three years, it’s giong to be hard and sad. It’s just something I’ve always loved to do.”

Smith is married to Ralph, and the couple have one son, Tray, who is an attorney in Houston, Texas.