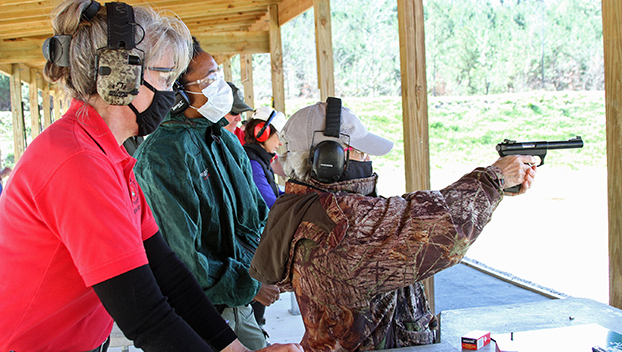 As firearms sales continue to set records, the Alabama Wildlife and Freshwater Fisheries (WFF) Division’s Law Enforcement Section recognized a demand in basic training for handgun safety and use. Eight million new gun owners were created in 2020 alone. The COVID-19 pandemic forced many to abandon their usual indoor recreations and take up new ones outdoors. For many that was shooting.

This past weekend, officers of the Law Enforcement Section and its Hunter Education Unit held the first of five “Introduction to Handguns” courses scheduled this spring.

Two sessions were held at the Cahaba River Wildlife Management Area (WMA) Shooting Range in Shelby County with 10 students at each session. The WFF staff covered the basics of firearms safety and marksmanship with new shooters from the area.

“It’s no secret that there has been a surge in firearms sales in the past year,” said Marisa Futral, WFF’s Hunter Education Coordinator, who was joined by Stuart Goldsby, Regional Hunter Education Coordinator in north Alabama. “My office has been getting a lot of phone calls from people who want to know if there are any classes available for new shooters. There’s a huge demand from people who want firearms instruction. We are trying to fill that need by starting with  handgun classes and possibly adding long gun classes in the future.

“The classes are open to anybody who would like to come, but we are kind of targeting the new users. This could be people who are thinking about purchasing a firearm, or they have already purchased one and need to learn how to use it. They might be timid about going to a shooting range by themselves.”

The next “Introduction to Handguns” classes will be held at the Swan Creek WMA Shooting Range in Limestone County on April 2 and April 17, 2021. The next class at the Cahaba range on April 10 is already booked up, but don’t hesitate to get on the waiting list as future classes at this location are in the works. The last currently scheduled class is at the Etowah WMA Shooting Range near Gadsden on April 24. Contact Futral by phone at 334-242-3620 or email marisa.futral@dcnr.alabama.gov for more information.

Lead firearms instructor Scott Kellenberger, one of only a handful of Alabama Peace Officers Standards and Training Commission certified master firearms instructors in Alabama, explained to the students the basics of firearms safety – always treat all firearms as if they are loaded; never allow the muzzle of the firearms to cover anything you are not willing to destroy; always keep your trigger finger off the trigger until your sights are on the target and you have made the conscious decision to fire; and always be sure of your target and what is beyond.

After Kellenberger’s safety instructions, the students were each provided with a personal instructor to learn handgun basics with a Ruger .22 caliber semi-automatic handgun. All necessary firearms, ammunition and safety equipment were provided by WFF for the new shooters.

The students learned how to load a magazine and insert it the magazine into the handgun and how to manipulate the safety and slide release. Instructors ensured that the students followed all safety procedures and offered tips on the proper grip for best control of the firearm and accuracy. Students also learned how to clear their firearms after a misfire or a failure-to-eject occurred.

“We try to introduce novice shooters to our (WFF) ranges,” Kellenberger said. “If they are interested, we get them involved in shooting sports. Obviously, we start with firearms safety. Then we talk about range safety. We discuss at length what range etiquette means. A lot of people have never shot on a public range before. They learn how to call the range ‘hot’ or ‘cold’ and how to keep everything safe on the range. For many new shooters, the simple fear of not knowing what is appropriate on one of our ranges can be a barrier to them. After this class, they all completely understand how to use our ranges and what they need to have in reference to a license.

“Then we move on to stance, grip and trigger control. We go over ammunition selection, dry-firing as a practice technique and then live fire.”

A set of paper targets was set up at 6 yards for students to shoot during the first session. After instruction and practice, the students were able to “ping” metal targets at 25 yards.

Kellenberger said .22-caliber handguns, either semi-automatic or revolver, are excellent firearms for the newcomers to learn the basics. Many of the students get a great deal of knowledge simply from getting the chance to shoot different styles of handguns. Often they go home after a class and purchase the exact handgun that they enjoyed shooting on the range.

“The .22s are great starter guns,” he said. “They can learn all the basics and do it inexpensively. For people who are a little bit afraid of firearms, there is not a lot of recoil and not a loud report. They’re easy to shoot, and the ammo is less expensive. That means a lot right now with ammo being sold in never before seen amounts.

“A progression a lot of people take is to start with a .22 and then move up to the firearm they are comfortable shooting or carrying if they decide to.”

Kellenberger said he can see changes in the students’ confidence from the start of the class to the end.

“With the volume of shooting and close instruction, they are a lot more comfortable with firearms and shooting than when they got here,” he said. “They were all smiling when they left, which is a good thing.”

“All of our shooters today purchased the Wildlife Heritage License before participating,” Kellenberger said. “I explained that this $11 license allows them to use our public shooting ranges and our public archery parks for a year. It allows us (WFF) to provide these services to the citizens of Alabama. WFF does not receive any money from the state’s General Fund, and a large portion of the funding that pays for programs like this comes directly from license sales and matching federal funds.”

As Kellenberger said before, it was all smiles when the class ended, and the participants were happy with their firearms education for the day.

“I think it was an excellent experience,” said Jacqueline Brooks of Montgomery, who was accompanied by her daughter, Jayla. “It gives them a chance to teach you one-on-one and make corrections. They show you the proper stance and how to hold your gun, so it was very exciting. I enjoyed learning how to clear a misfire. Sometimes people’s guns do misfire, and they don’t know what to do. I really enjoyed learning that.”

Jamie Ligon of Hoover said she decided to take the class for two reasons, the COVID-19 restrictions that caused her to seek solace on hikes through the woods and the fact her dog probably would not protect her if a situation occurred.

“Since the virus came around, about the only exercise opportunities are outside,” Ligon said. “I’ve gotten very interested in hiking with my dog. I decided if I encountered a snake I might want to have a way to protect myself. My friend asked me if I was afraid walking around. She knows my dog and said, ‘I know Boris is not going to do anything but kiss them to death.’

“I was afraid of handguns and after the class not nearly as much. The instructors were all very knowledgeable. I’m glad I did this. I’m going to recommend this to a friend of mine.”

Patti Grace of Vestavia Hills said she loves camping and decided she needed to learn about firearms for her protection.

“I solo-camp,” Grace said. “Sometimes I boondock, which means I camp out in the boonies without electricity and maybe not much safety. I thought it would be good to know how to use a firearm safely. I’ve never shot anything other than a BB gun when I was 8 years old. This was amazing. My instructor, Stuart, was awesome.

“I’m kind of addicted to it now. I’m going to have to get all kinds of guns. I think this is so good for the public to have a place to come. The experience was awesome.”