A funeral service for Willie Frank Grace was held on April 11, 2021 with Mayberry Funeral Home directing. 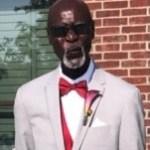 Newborn Cali Leighelle Beard, this precious angel was called by the Lord on April 1, 2021.  She is survived by... read more