A high-speed chase through downtown Atmore and on Interstate 65 north Tuesday ended with the arrest of an Atmore man wanted on attempted murder charges. 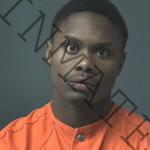 Chief Chuck Brooks said the suspect wrecked close to Evergreen, and was placed into custody.

Brooks said in a release that Scottie Dale Robinson, 28, of Atmore, faces two counts of attempted murder relating to a shooting that took on 6th Avenue on April 25.

“On Sunday, April 25, 2021, at approximately 10:48 p.m. the Atmore Police Department received a telephone call from Atmore Community Hospital in regard to a patient showing up in the emergency room with gunshot wounds,” Brooks said. “APD officers responded to the hospital and identified the victim as Gregory Lavon Robinson, 33 years of age, from Atmore.

“Due to the severity of his injuries, he was flown by life flight to an undisclosed medical facility for further treatment,” he said.

Brooks said APD officers discovered through their investigation that the shooting took place near the 100 block of 6th Avenue.

“APD officers responded to the scene and discovered shortly after another male victim who had been shot,” he said. “Oneius Cortz White, 19 years of age, was found injured in a nearby residence. Emergency medical personnel responded and transported him to ACH, where he was later flown by life flight to an undisclosed medical facility for further treatment.”

Brooks said investigators determined that the shooting took place at the 6th Avenue address after a disturbance ensued, and identified the person responsible.