Following a brief illness, Mr. Edgar Delano Norris finished his race on this earth on April 24, 2021, surrounded by his family. 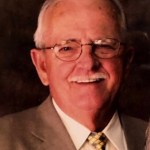 Mr. Norris is preceded in death by his parents, Kelon and Buna Norris; five brothers; two sisters; and his wife of 62 years, Molly Allen Norris.