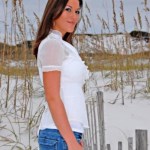 She was born on January 3, 1983 in Pensacola, Fla., to Phil and Charlotte Lucas.

She is preceded in death by her sister, Lorri Kenzie Lucas; and her grandparents, Calvin and Ethylene Overstreet and Robert and Laura Lucas.

She is survived by her children, Ariana Dionne of Pensacola, Ashlyn Dionne of Pensacola and Griffin Lawson of Navarre, Fla.; her sister, Kinzie Lucas Shamblin of Tuscaloosa; her parents, Phil and Charlotte Lucas of Enon, Fla.; and her nieces, Lorri Harrell and Raegan Harrell.

A funeral service will be held tomorrow, Thurs., April 29, 2021, at 1 p.m. at Enon Baptist Church in Enon with Bro. Ted Toop officiating.

Visitation will be held on April 29, 2021 from noon until service time at Enon Baptist Church in Enon.