Those were just a few words of many used to describe Escambia County basketball and assistant football coach John Shears during a candlelight vigil at the school’s football stadium tonight. 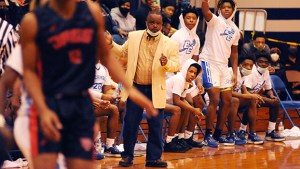 Shears passed away last week, and the vigil was held in honor and memory of him.

Shears’ family members, fellow coaches, football and basketball players along with many students and faculty paid their respects.

“I’ve coached against and with him,” ECHS athletic director and head football coach Scott Mason said. “We had some good times.

“I appreciate his friendship, and his loyalty and wisdom,” he said. “And the love he had for each one of the kids.

“It was all about the kids for John,” he said.

ECHS Principal Amy Cabaniss said Shears will always be a part of the school.