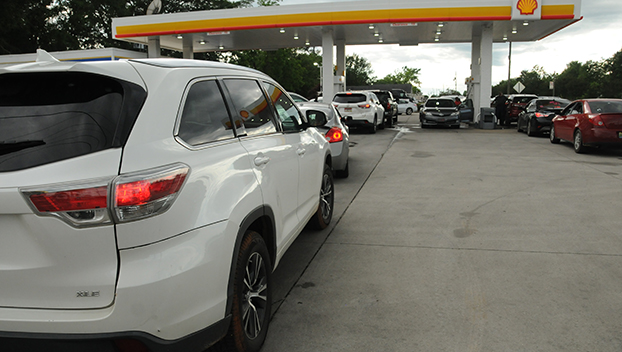 Local gas stations had lines of cars waiting to get gas Monday afternoon, days after a cyberattack was activated on an operator of a major U.S. fuel pipeline.

According to reports, the company – Colonial Pipeline – said it hopes to have services mostly restored by the end of the week, according to the Associated Press.

Colonial Pipeline said Saturday that it had been hit by a ransomware attack and had halted all pipeline operations to deal with the threat. Two people close to the investigation said that the shutdown had been carried out by a criminal gang known as DarkSide that cultivates a Robin Hood image of stealing from corporations and giving a cut to charity.

Futures for crude and fuel, prices that traders pay for contracts for delivery at some point in the future, typically begin to rise each year as the driving season approaches. The price you pay at the gas pump tends to follow.

CP delivers around 45 percent of the fuel consumed on the east coast. The company halted operations last week after revealing a ransomware attack that it said affected some of its systems, according to the AP.

“While average gas prices jumped last week as the nation continues to see COVID-19 recovery, all eyes are now on the Colonial Pipeline and the fact a cyberattack has completely shut all lines, leading to what could become a major challenge for fuel delivery,” said Patrick De Haan, head of petroleum analysis for GasBuddy. “The situation is growing more intense each day that passes without the pipeline restarting, and motorists are advised to show extreme restraint or exacerbate and prolong the challenges. If the pipeline returns to service in the next day or two, the challenges will be minimal, but if full restart doesn’t happen by then, we’re likely to see a slight rise in gas prices, but more importantly, challenges for motorists needing fuel in Georgia, Tennessee, the Carolinas, Virginia, Northern Florida and surrounding areas. I’m hopeful the situation will quickly improve as multiple levels of government are involved, this may become a nightmare should it continue just ahead of the start of the summer driving season. GasBuddy will continue to watch the situation and update as necessary.”