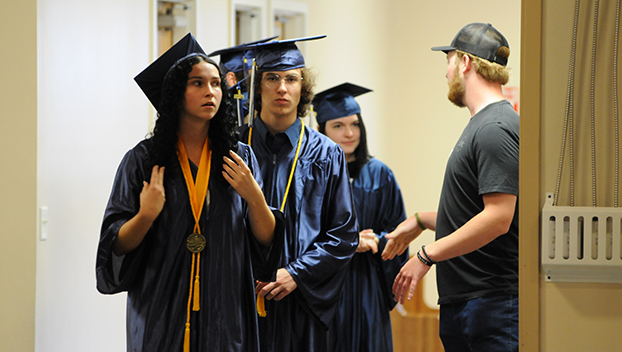 As Atmore Christian School Valedictorian Megan Wilson thanked her parents during graduation exercises on May 21, her thankfulness for all she had broke through.

Wilson was one of six who graduated from the private school last Friday night.

She thanked all who were gathered at the cereomny for contributing to the graduating seniors’ education and lives.

“To the ACS staff, thank you so much for all you have done,” Wilson said. “As a graduate of ACS, you have helpes shape our minds not only intellectually, but spiritually.”

Wilson said getting an education opens doors, and having a spiritual connection gives their lives purpose.

Salutatorian Micah Mast said the journey to graduation was long, but the class made it.

“To our teachers, thanks for working so hard,” Mast said. “You have gone above and beyond to do what you have had to do. You even put up with us, even when we had doubts.”

Mast was sure to thank the parents n the room.

“You watched us as we went through our daily lives,” he said. “When we were succeeding, you encouraged us to keep that going.”

Mast thanked the rest of the ACS staff as well.

“Without anyone of you, our outcomes would be vastly different,” he said. “We won’t let what you have given us go to waste.”

After the keynote address, the class’s song/slides were played followed by the presentation of diplomas by Headmaster Tim Battles and Jerry Gehman, who is an ACS boardmember.

A prayer of blessing was said over the graduates by Blaine Copenhaver.