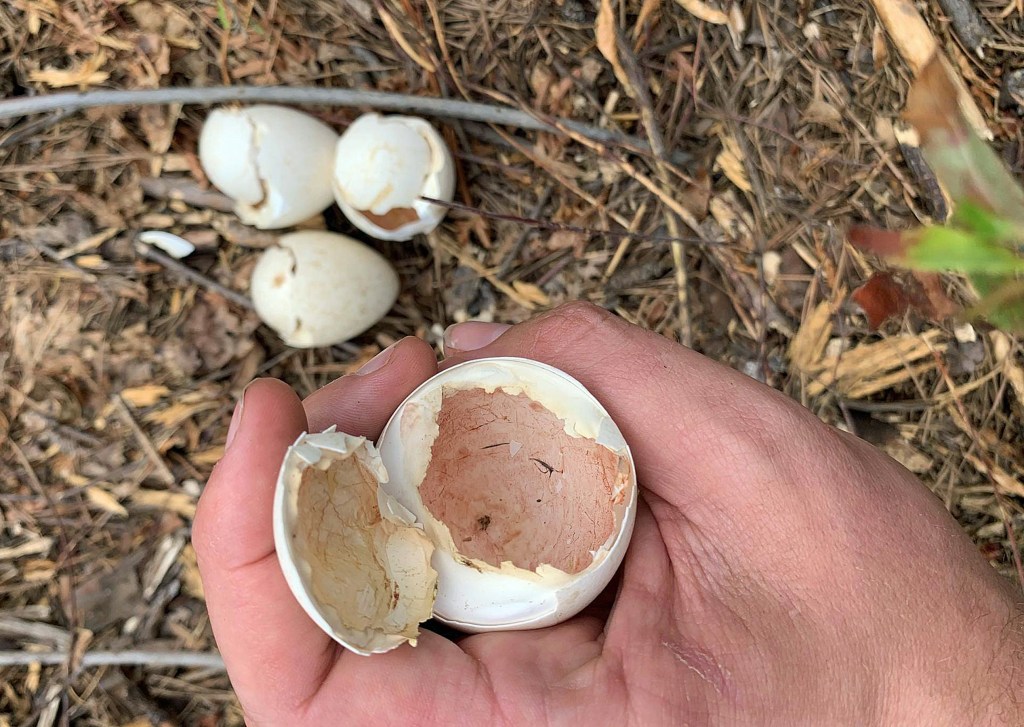 Logging crews in Alabama have wildlife encounters on a regular basis as they harvest one of the state’s renewable resources. One crew from Sullivan Timber Company was busy cutting timber in north Mobile County when the loggers spotted something worthy of protection – a turkey hen sitting on a clutch of 10 eggs.

Dustin Phillips, the procurement manager for Canfor Southern Pine’s Mobile mill, had hired the crew to harvest the timber on the tract near Gulfcrest. Crew foreman Brent Weaver spotted the turkey nest while he was running the feller-buncher and sent Phillips a photo on May 8.

“I called Brent and asked him what he was going to do,” said Phillips, an avid turkey hunter. “He said, ‘I’m going to flag around it.’ He flagged an area about 20 by 20. They kept working around her, felling these trees, and she would just sit there on the nest. They were riding all around the area that was flagged, and she did not move one time.

“I couldn’t believe that. I said, my gosh, she is committed to that nest. I cruise timber and have busted hens off the nest all the time. This time, they were cutting all around her, and she stayed put.”

Weaver, who also loves to hunt turkeys, soon learned the hen’s daily schedule, sitting on the nest until about 4 p.m., when she would walk to a nearby mudhole for a drink of water. She would then stroll through a nearby greenfield to forage for seeds and insects. By the time the crew arrived the next morning, the hen was back on the nest.

“When we weren’t cutting and skidding right next to the nest, we were loading trucks 100 yards away,” Phillips said. “The loader operator would call on the radio and say, ‘Here she is. She’s getting some water.’ I guess she got used to the equipment. I was just pretty surprised. I’d always been told that if you bump a hen off the nest, she might not come back. I don’t know if that’s true. Evidently it’s not, at least to this hen anyway. I just thought it was neat how she stayed there with all this loud logging equipment.

“That’s what the crew talked about. They kept track of her every day.”

Phillips went to the site on May 18 and checked on the nest. He found good news. Eight of the eggs had hatched. Two were infertile.

“A day or two later, less than a quarter mile from there, the guy who manages the land went to check on the crew,” Phillips said. “He saw the hen and eight little ones. I told Brent I couldn’t believe that nest had survived.”

Phillips was also encouraged by the amount of turkey activity on that tract.

“There were turkeys all over that place,” he said. “Every time I’d go out there to check on them, you’d see a gobbler or two. They had a huge greenfield there, and sometimes you’d see 20 to 30 turkeys in that field. Brent said two mornings in a row, a gobbler was strutting in the road to the site.

“Sometimes loggers have a reputation of destroying habitat, but we do what we can in situations like this. All you have to do is flag around it. We do that with gopher tortoise burrows too. We flag around it and stay off of it.”

When he wasn’t working timber, Phillips spent his off time in the turkey woods in Wilcox County. He deemed his turkey-hunting success as “an okay year.”

“I missed two. The first two chances I had I missed,” he said. “I was sick. I was hunting this bird the first couple of weeks of the season. It was one of those birds that just didn’t want to cooperate. My dad said, ‘You’re going to waste your whole season on that bird.’ I told him I didn’t care if that was the only bird I got. Then I missed him.

“I missed another one and was really sick. But I ended up on a pretty good note. I got three the last couple of weeks of the season. I got lucky.”

Steven Mitchell, Upland Game Bird Coordinator for the Alabama Wildlife and Freshwater Fisheries (WFF) Division, said the number of hunters who got lucky in 2021 was slightly lower than that total in 2020.

“From the Game Check reporting numbers, we had almost two thousand fewer harvests and about the same number of hunters in 2021 as compared to 2020,” Mitchell said.

“Conditions for the 2020 and 2021 seasons were similar,” Mitchell said. “The 2020 season might have been a little better the first couple of weeks of the season. I think the 2021 season went well overall.”

“Then it was reversed in other areas,” he said. “The last week of the season where I hunted, the turkeys didn’t gobble much. They were gobbling a few times on roost, but when they got on the ground they weren’t saying much.

“I saw a few gobblers by themselves, but they didn’t respond to my calling with gobbling. I still had a couple of turkeys I called in. They just didn’t gobble, but they came in strutting and drumming. And, then again, I’ve had reports from as recently as last week of turkeys strutting and gobbling as far south as Clarke and Geneva counties.”

Mitchell said he and the WFF staff will be conducting brood surveys during July and August to evaluate the 2021 hatch and poult survival.

“Most of the poults are so small right now they’re hard to see,” he said. “We won’t be able to do a good survey until they get out in fields and pastures where we can see them and put them in a size category.”

Although he received a few reports of turkeys hatching at the end of April, Mitchell said the average hatch date is around the last week in May.

Mitchell said nest predation is always a concern, especially in areas where people are not actively controlling the predators like coyotes and raccoons.

“But turkeys have always had to deal with predators,” he said. “Habitat improvement is going to be the number one thing we can do to benefit turkeys.”