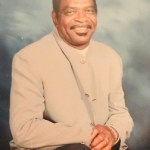 Earl Bodiford, Jr. transitioned from time to eternity on June 9, 2021.

Interment will be held in Springhill Cemetery of Marlow. Ministry of comfort is entrusted to Mayberry Funeral Home.