On the morning of July 1, 2021, God sent his angel to pluck from his garden another lovely flower and escort Leroy Hall Sr. to his eternal home. 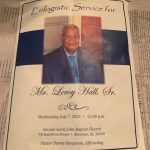 Leroy was the seventh child of the late Viola Hall and Gussie Hall Sr. He had two children who preceded him in death, Paul Hall and Alice Faye Hall-Walton.

Leroy married Claudie Mae Herbert on July 10, 1946, and from this union, eight children were born.

Interment was held at Second Saint John Cemetery in Brewton with Christian Memorial Funeral Home in charge of arrangements.