Clarence Matthews R., was born on April 25, 1943, to the late Willie and Georgia Mae Matthews in Wilcox County. 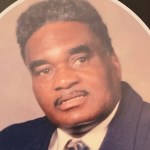 He attended the Escambia County Training School, and retired from Monsanto in 1991.