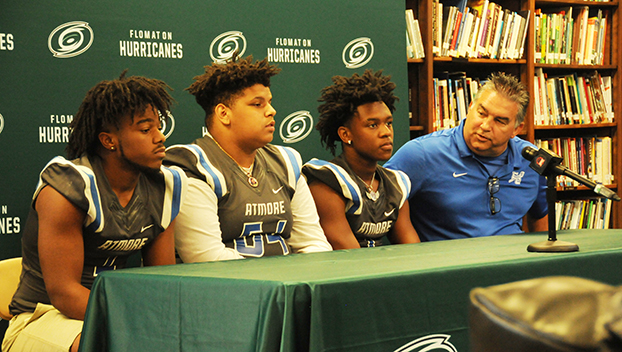 Local high school coaches and players gave their thoughts on the upcoming 2021 football season during the Coastal Connection Media Day at Flomaton High School on July 26.

FHS, Escambia County, W.S. Neal and T.R. Miller were four of 15 teams who participated in the media day opportunity, which put a highlight on teams from north Mobile County, Monroe County, Clarke County, Conecuh County and Washington County to name a few.

Set to the backdrop of the host school, each local team gave their thoughts on the season.

The following is a recap of each local team by order of appearance:

“This is awesome that we got everybody to come to Flomaton, Alabama,” Canes head football coach Doug Vickery, who is entering his 16th season at FHS, said. “Flomaton has been really good to me and my family. My oldest graduated from here, and my youngest is about to graduate from here.”

The Canes are coming off a 8-3 season 2020 season after falling in the first round of the playoffs. FHS had to forfeit two regular-season games because of contract tracing from the COVID-19 virus.

Vickery said last year was tough in how it ended.

“That was a rough time last year,” he said. “We were sitting there 7-0 and ranked fourth in the state and looking forward to playing our last region games against Hillcrest-Evergreen and T.R. Miller. Then, contract tracing hit us. We lost eight starters.”

Vickery said they managed to get the players effected in time for the regular season finale against ECHS, but didn’t play well against Trinity in the first round.

“We just played probably the worst game all year,” he said. “It didnt seem like we were all together and jelled. It left a bad taste in my mouth. The winter workouts have been great.”

Vickery said the 7-on-7s have been good for the team this year, and the team has a good group of receivers for his son, Zeb, to throw to on the field. Zeb is the Cane’s starting quarterback this season.

“Zeb has a lot of experience at quarterback,” the coach said. “The receivers are a little young, but we’ve got some good ones out there.”

The Blue Devils return a lot of big players up front for the 2021 season.

Head coach Scott Mason said while that may be a good thing, it’s what the team has to go with it that matters.

“We’re working on it,” Mason said. “Maybe COVID will leave us alone.

“We have a large line, but they were so young last year and had to grow up,” he said. “I hope the experience they got last year will bode well for us this year.”

Mason said last year’s team learned a lot about adversity and has seen them be more mature this season.

“I wanted the kids to play,” he said about the difficulties of navigating COVID. “The object of the season was to get them to play 10 games. For the most part, in the locker room, we were COVID free. We fought through it. We didn’t have a running back, and we fought through. My job was to make sure my kids are safe.”

When asked about what he expects from his seniors, Mason said for them to “be seniors.”

“Be leaders,” he said. “We have lacked that in the last – since I’ve been here – we don’t have the senior leadership that we should have. I think it’s a reflection on the team, how we approach the game. They need to get us lined up and get our heads in the huddle.

“Win, lose or draw, we’re giong to play football,” he said. “I can only do so much. They’ve got to take charge and be the leaders they’re supposed to be.”

Brandon Wilcox enters his first season as head coach of the Blue Eagles.

Wilcox said the morale was low at first when he first got to East Brewton, but that’s turned around.

“We don’t have an option B,” Wilcox said. “Option A is to win. We believe in the coaching staff we’ve built. We know that at some point we’ll turn the corner.”

Wilcox said he believes a strength of the team is its skill.

“We’re a little bit behind in the weight room, but we’ve made some strides,” he said. “It’s kind of a double edge sword.”

Wilcox said when WSN played FHS in a 7-on-7 this summer, he noticed there were some signs of improvement.

“We’ve got to make some strides in the next month,” he said. “We’ve got some guys we can run.”

Offensively, Wilcox said the team is still trying to figure out its strengths.

Wilcox said the Blue Eagles will be transitioning from the Wing-T to the spread offense this season.

“There aren’t any secrets in what we’re doing,” he said. “We’re going to thorw the ball 20-30 times a game, and run the bal 40-50 times a game or how ever many times we get it. I want to be where we hit every quadrant on the field.”

Hubbert said this is the first year he’s been able to start his style of program from the start in January.

“This is the first year we’ve seen that,” Hubbert said. “It’s shown in their attitude and in the weight room.”

Hubbert said a strength for the team this year is going to be its unification.

“We only had one kid that wasn’t perfect attendance during the summer,” he said. “That’s unheard of in these days of time. Unity is going to be one. On the field, in the trenches, we’ve got the most kids back.”

Hubbert said a question that he’d like answered when practice begins next week includes finding the four to five running backs the Tigers will feature in the back field.

When asked if Hubbert’s been able to put his stamp on the team, he admitted he doesn’t know what his stamp is, however.

“I know what I like to see,” he said. “I like to see relentless effort. They don’t do a lot of griping and moaning. If that’s a stamp, I’ll bd proud of that statement.”

Each was asked what their goals were for the upcoming season.

Atkinson said that he’d like to grow a bigger bond with each other, and make it all the way to the championship and get one for the city.

Hart had a simpler answer.