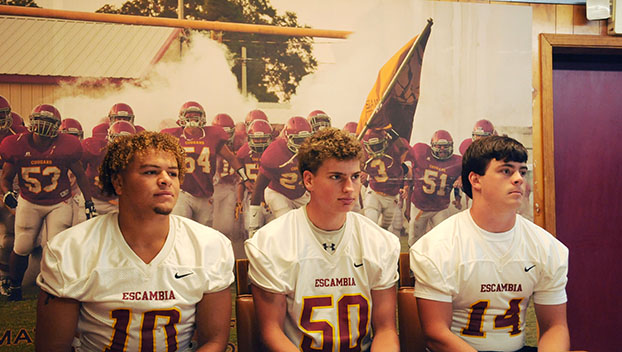 Escambia Academy has been working.

The Cougars got the chance Tuesday to tell local media outlets how hard they’ve been hitting the weight room and gridiron during Media Days at the Canoe School.

“During summer workouts, we put in a lot of work,” Brown said. “We’ve worked hard. We had two a days last week. This season, I think we’re going to be pretty good.”

On summer workouts, all of the seniors said EA instituted a more rigorous and hard program.

“We had harder running and the workouts were more intense,” Sims said. “Practices so far have been harder like they haven’t been.”

Stephens noted the reason why the team is working hard is because it wants to have a good finish to the season. Last season, the Cougars fell 36-34 to Chambers Academy in the AISA Class 2A state championship.

“It’s just a whole lot of hard work,” Stephens said. “We’ve got to work a whole lot harder than we did last year. You can’t lose by two points again (in the championship).”

The Cougars begin their season with a 1-2 punch of top-ranked Pike Liberal Arts in week one and then second-ranked Glenwood the following week.

“I think we will work harder than any team we play,” Howell said. “We’ve just to go to focus on the little things. We’ve got to work hard and focus.”

One reoccurring theme during the media days was that of penalties. The seniors said if they commit penalties during practice, it’s bear crawls for them afterward.

Nettles said last season serves as a reminder of what could’ve been.

“Over the summer we focused on the little things,” Nettles said. “The little things matter. You’ve got to keep focused when you’re tired. You’re going to have to work passed it and come back again.”

“We need to stay focused this year,” Smith said. “We’ll need to pay attention to the little things and finish.”