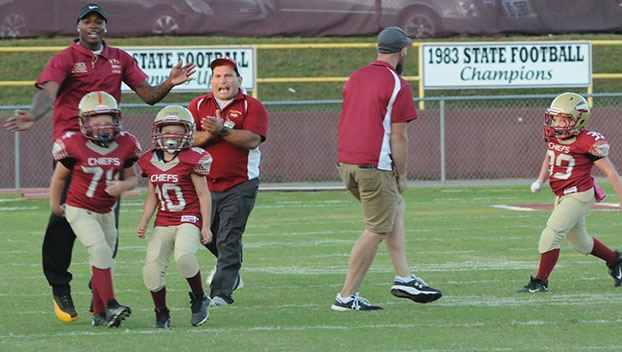 Greg Gibson will live on in the NWE Football and Cheer league, officials and coaches said.

Gibson passed away early Thursday morning because of COVID-19, according to reports.

He began coaching in the NWE league when he was 20 years old, and served as president since the 2013 season.

“From the time he’s coached, there have been kids who have come back now who are coaching with us that he coached,” Scully said. “He’s had kids he coached that are presidents of parks in our conference.”

Vice President Josh Greenwell said it’s hard to describe how he was with the kids.

“The attention and commitment he gave to the program, he just always wanted the best for the kids,” Greenwell said. “He did everything right for the right reasons.”

“It would’t be what it was if it wasn’t for him,” McLaughlin said. “He was the driving force.”

Gibson was described as a man who was relentless and someone who cared for everybody.

“If he made his mind up to do something, it was going to get done,” Scully said. “It didn’t matter how hard he was going to work.

“He was probably the best leader I’ve known,” he said. “He motiviated me to become who I am in NWE. I’ve been involved in the organization for six years. I was in the background, but getting to know him he motivated me to be more involved.”

“He was a man that you can call anytime in the day or night,” Greenwell said. “He would drop whatever he was doing and come help you. He was really a great guy. He loved his family and he loved football. That was his passion.

“He really made our park what it is today,” he said. “He was just a leader of the community.”

McLaughlin said he believes Gibson will be remembered for not just being a coach, but for somebody who truly believed that if he could help one kid then it was worth the years of his service to the community.

“He just really loved the kids,” McLaughlin said. “I think he believes football was a tool – he loved football and was good at it – we had many discussions especially with it being expanded, that if any kid who wanted to play got the chance to play.”

Scully said Gibson was around everything revolving the program.

“I just remember he was always there,” he said. “You didn’t have anything going on in that park if you didn’t have Greg there. He would stay until the last person left. He was there with you.”

Greenwell, who went to high school with Gibson, said even then, he helped on the field.

“I knew Greg from high school,” he said. “He was a senior when I was a freshman. I just remember him even helping me back then. I was learning.”

“Our phone conversations, me and Greg were – especially during football season – were on the phone every day for 30-40 minutes and 20 minutes after practice,” McLaughlin said. “He was like a brother to me. He was special. I’m a reitred Marine and a lot older than Greg. I’ve been all over the world. He’s very special. I’m blessed to have known him in such a short time. For as long as I was around him, I am a better man for it.”