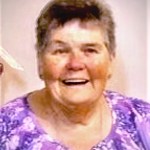 She was born in Talladega, AL. on July 3, 1936 to the late Robert C. and Vergie Garner Phillips.