UPDATE: The Escambia County Sheriff’s Office announced today that the wanted individual has been arrested. ECSO officials said this morning that Davis turned himself in.

The Escambia County Sheriff’s Office (Ala.) is looking for information on the whereabouts of an individual wanted on sex abuse charges. 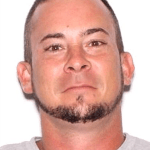 Sheriff Heath Jackson said on the office’s Facebook page that Thomas Benjamin Davis, 41, is a white male, weighs 200 pounds and is 5-foot-11. He has tattoos on his right ankle (a bull and a set of wings), left arm (dog and a clover) and his back (wolves).

Jackson said Davis could be driving a new silver Nissan Titan without a tag, and has property in Brewton and Walnut Hill, Fla.

“It’s possible he is between the two states, and last known is possibly in Texas,” he said.

Jackson said Davis is wanted with the ECSO on a felony warrant for sexual abuse of a child less than 12 years old and has a failure to appear warrant.

Jackson said extradition for Davis can be done nationwide.

Jackson added that Davis is a convicted felon, and the alleged owner of firearms, possibly on his person.

Anyone with information as to the whereabouts of this individual should contact the Escambia County Sheriff’s Office at its CRIME TIP HOTLINE at 251-809-2154 or the ECSO MAIN LINE at 251-809-0741.