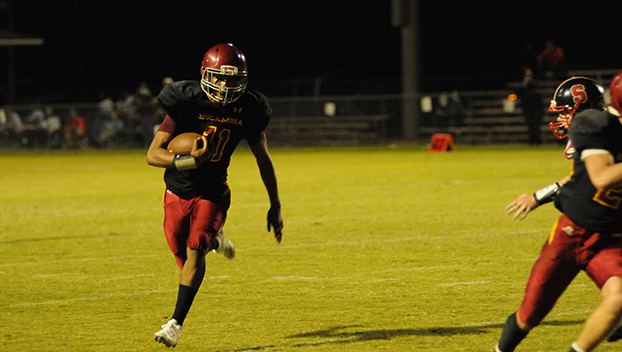 Trailing 19-13 at halftime, Escambia Academy’s defense stepped up big early in the third quarter and the Cougars went on to defeat top-ranked Pike Liberal Arts 42-26 tonight in Troy.

The third-ranked Cougars’ defense got a sack with 8 minutes left, and from there the Canoe School was in control. The game was close later in the same quarter, but EA never let up.

Less than 2 minutes later, EA recovered a fumble, and Sims went on to convert another touchdown less than a minute later.

Earlier in the game, EA led 7-6 with 7:39 left in the second quarter. Pike Liberal Arts added a touchdown a short time later for a 12-7 lead.

EA answered with a score, and the Patriots notched a touchdown just before halftime.

The Cougars visit Glenwood next week in regular season action.