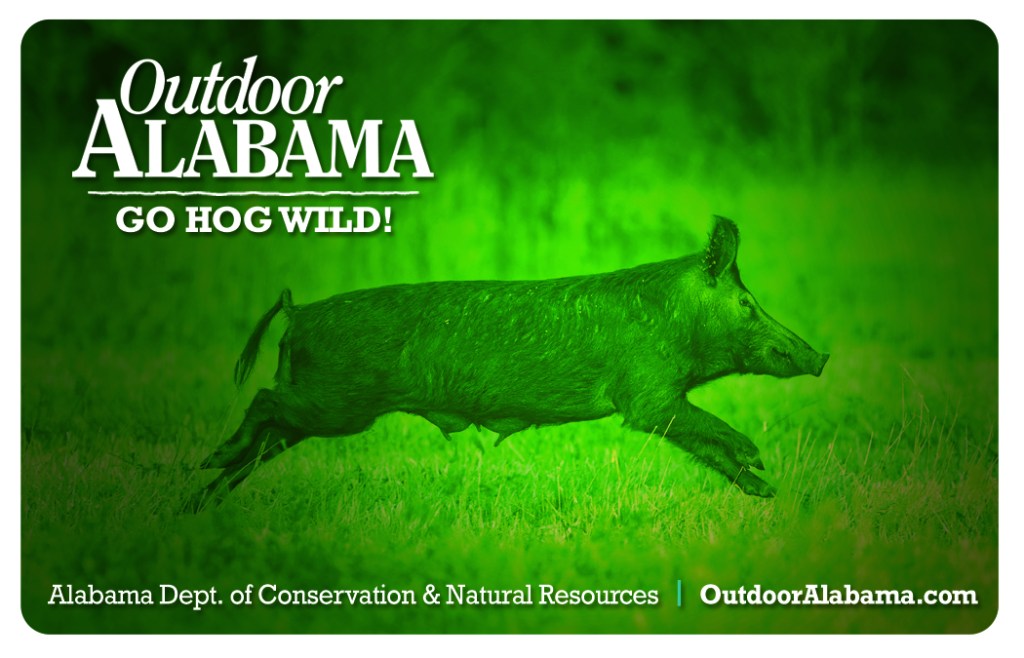 Beginning on Monday, August 30, the Alabama Wildlife and Freshwater Fisheries (WFF) Division will offer a one-click solution for those who want to hunt feral swine at night. 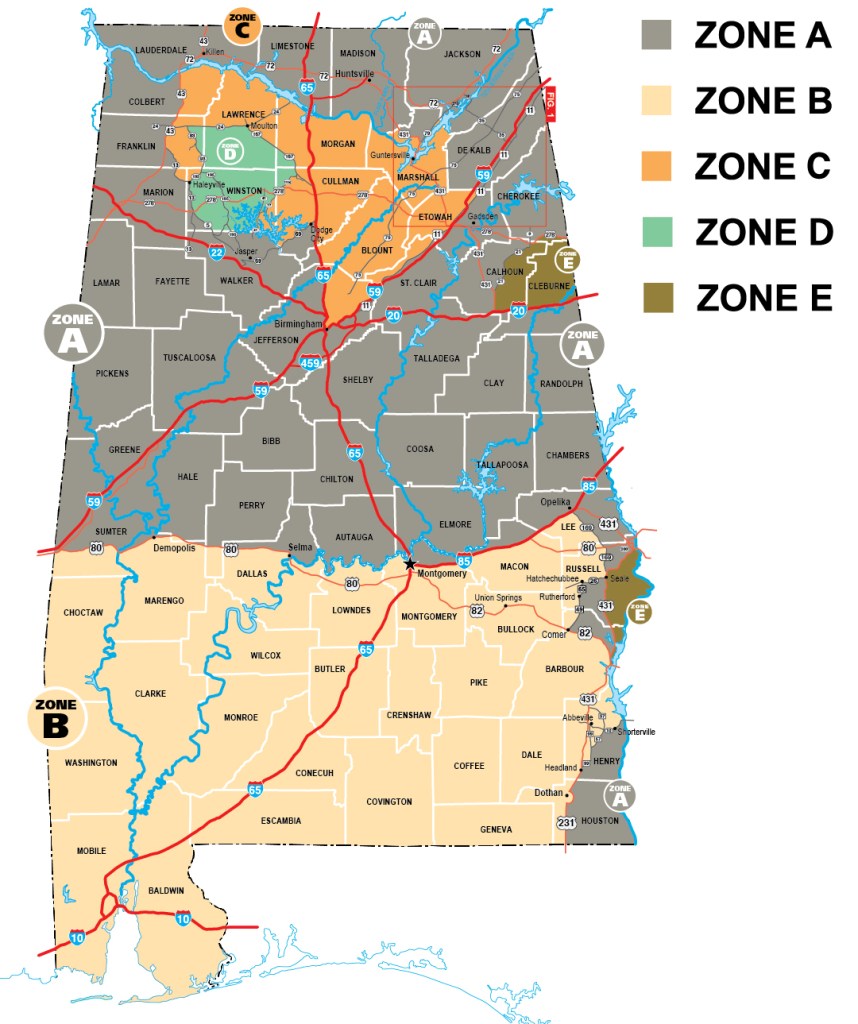 The new law that allows nighttime hunting of feral swine and coyotes went into effect on July 1, 2021. When the 2021-2022 licenses become available Monday, hunters can choose from a variety of all-access packages, including the “Hog Wild” package that gives hunters all the license privileges needed to take advantage of the new nighttime hunting opportunities.

“When the nighttime feral swine and coyote hunting license was passed, it seemed like a good idea to create a new license package,” said WFF Assistant Director Fred Harders. “In that package, residents and non-residents will be able to click one button and purchase a small-game license, a bait privilege license, which would allow folks to use bait while hunting feral swine at night, and the nighttime license. We felt that those three licenses would be what most people would like to purchase.

“Of course, the price will vary depending on whether you are a resident or non-resident. This will allow that individual to just click that package instead of going in and figuring out what they need. It’s a convenience for people who would like to hunt feral swine at night over bait and not the regular all-game hunter.”

Harders said hunters who wish to purchase the all-game hunting license will need to go through the regular procedure of buying separate licenses to be able to hunt feral swine and coyotes at night.

Harders also reminds hunters that all of the current year’s licenses expire on Tuesday, August 31. Licenses for the 2021-2022 seasons will be available on Monday, August 30.

“We pre-sell these licenses for the coming year for several reasons,” he said. “Several seasons open early in September. We don’t want to make it difficult for hunters to participate in those seasons. Also, with all the licenses expiring the same day, the volume at the beginning of the year is very heavy, so we want to spread out the demand to ensure the license system performs as designed.”

Harders said since the nighttime licenses became available this summer, about 700 hunters have taken advantage of the new opportunity.

“We expect pretty good interest in the nighttime license for the upcoming year,” he said. “It’ll be interesting to see how many we sell the opening month. Whether it will be as popular as the bait privilege license, time will tell.”

During the current license year, WFF sold about 160,000 resident bait privilege licenses and more than 17,000 to non-residents. A bait privilege license is required for anyone who wishes to hunt deer or feral swine over bait, which includes corn and other food, protein supplements, mineral blocks, juices and sprays. Unlike other licenses, the bait privilege license and the nighttime hunting license do not allow for exemptions for age or landowner status.

As the fall hunting seasons approach, WFF Director Chuck Sykes said the news about chronic wasting disease (CWD) is encouraging, but WFF will remain vigilant in trying to prevent its spread into Alabama. Positive cases have been reported in Mississippi and Tennessee.

“So far it’s moving slowly, like we told people it would if it wasn’t artificially transported,” Sykes said. “It’s inched a mile or two closer to us, but we’ve got several miles to go, and we have a major river system as a barrier. I think we’re as fortunate as we can be right now on the CWD front.”

Freezers that allow hunters to drop off their deer heads at self-service sample stations are located throughout the state and are available to receive samples for CWD testing 24 hours a day, seven days a week. Visit www.outdooralabama.com/cwd-sampling for a map of sampling locations.

At the self-service locations, hunters must first remove the deer’s head with 4-6 inches of neck attached. For bucks, antlers can be removed at the base of each antler or by removing the skull plate before bagging the head. Hunters will then place the head in the provided plastic bag and tie it closed. They will need to complete all sections of the Biological Sample Tag and attach the tag to the bag with a zip tie. Hunters will take the bottom receipt portion of the Biological Sample Tag before placing the bagged head in the freezer. All materials needed to drop off a sample are provided at each freezer location.

“We wish the hunters would participate more with their volunteer drop-offs at our freezer locations,” Sykes said. “Our biologists are still sampling deer, and our enforcement officers are still patrolling the roads to keep people from bringing deer carcasses into the state.”

Regulations do allow for the importation of certain parts of the deer but not whole carcasses. Permitted parts include:

“We’re doing everything we can to keep the state as safe as we can and to be prepared if it does get here,” Sykes said.

Alabama’s deer hunting opportunities are divided into five zones to allow WFF to manage the deer harvest on a more local level. For the 2021-2022 season, Zone C in north Alabama has been adjusted according to the latest data on deer populations.

“Every year we tweak the zones a little,” Sykes said. “The more data we get coming in through Game Check, our staff and hunters, we can fine-tune those zones. We made a small tweak in the north central part of the state. Some of the areas with a reduced antlerless harvest limit fell in areas with a higher deer population, so we took them out of Zone C. The more we work with the hunters and staff in these areas and the better information we get from Game Check, the more we can refine these zones.

“Our deer populations are in a good place right now. We’re going to continue to monitor and make tweaks where we need to.”

Speaking of Game Check, Sykes is happy with the increased participation from hunters to report all their deer and turkey harvests. A change in the possession regulation last year significantly increased participation in Game Check. The possession regulation requires that hunters who harvest deer and turkeys must maintain proper paperwork when transferring possession of that animal to a processor, taxidermist or any other individual.

The person in possession of all or part of a deer or turkey that is not their own must retain written documentation with the name of the hunter, the hunter’s Conservation ID number, the date of the harvest and Game Check confirmation number. The information can be documented on any piece of paper, or a transfer of possession certificate is available in the Alabama Hunting & Fishing Digest or online at www.outdooralabama.com.

“Game Check participation went through the roof last year,” Sykes said. “We tweaked the regulation, and it made all the difference in the world. Our participation went from 40 percentile into the 90s. We’re now getting more of the valuable data we need to make quality management decisions.”