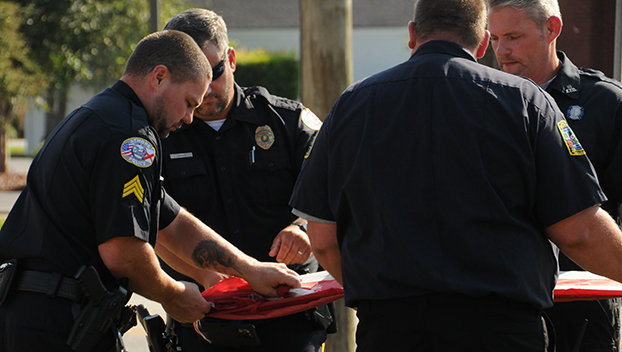 Fold by fold, the unusable American Flag began its journey to retirement.

The American Legion Bill Glenn Rushing Post 90 held a 20-year 9/11 remembrance and flag retirement this morning at the post.

Commander Dave Graham read the flag retirement and its meaning, including what each of the folds represent.

As each fold was read, the flag fold team, including American Legion Post 90 members Harold Madison and Mike Hanks; Atmore Firefighters Danny White and Brandon Barber; and Atmore Police Officers Jacob Maholovich and Ryan James, folded the flag until it was made into a pouch.

From there, AL Members Jack Wright, Roger Presley and Paul Chason began the retirement and raising of the new flag.

The first flag was placed in a brazier and then lighted.

Earlier in the ceremony, taps were played by Bethany Presley and the reading of the 13 service members who were killed in Kabul, Afghanistan on Aug. 26, 2021, was held.

The brazier was constructed and donated by Jerry Wayne Bowen of GA West Construction.