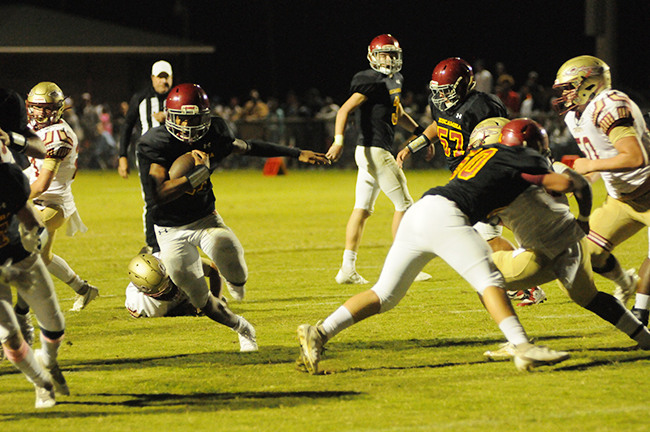 Shown is Escambia Academy and Northview during their 2020 clash. | File photo

Football, like most competitive sports, is all about the counter punch or reaction to play on the gridiron.

Top-ranked Escambia Academy and Northview will be doing both this Friday night in Bratt, Fla. in a regular-season contest.

This contest marks the fourth time both have met. Last season, EA put together a strong second-half effort to beat NHS 27-22 at home on Oct. 2, 2020. During the contest last season, EA’s Landon Sims and Bubba Nettles scored two touchdowns each.

EA enters the contest 4-0 on the season. The Cougars beat Wilcox Academy 43-0 to take a lead in the region standings.

During the Chiefs’ loss last week, quarterback Kaden Odom exploded in the second half, and went 15-of-22 for 292 yards in the air. Jamarkus Jefferson rushed 86 yards on 20 carries.

Chiefs head football coach Wes Summerford said they held an early lead against Gulf Breeze, but it felt like the rest of the game they were trying to play catch up.

“That was the opposite of what we need to do against those guys (Gulf Breeze),” Summerford said. “We wanted to get ahead early and slow the game down.”

Summerford said during the second half, the team felt like it could come out throwing.

“We actually looked really good throwing,” he said. “The receivers stepped up big for us in the second half. We stayed in the ball game.”

Summerford said he reminded the guys that they were in the game, but a penalty or mistake quelled any momentum.

“We’ve got to do better when the game is on the line,” he said.

Four EA players scored touchdowns during the Cougars’ victory over Wilcox. Sims led with two touchdowns on the ground.

Nettles rushed 71 yards on 10 carries and scored a touchown; Christian Crook and Devin Kelly scored one touchdown each.

Jacob Lee had two receptions for 41 yards and a score for EA.

EA head football coach Hugh Fountain said it’s always a big game when they get to play against NHS.

“It’s always an exciting game to us,” Fountain said. “They’ve got a good football team.”

Summerford said what stands out about the Cougars are their athletes.

“They’re really athletic, especially at that level of football,” he said about the AISA Class 2A team. “I know they’ve got leadership returning. You can tell those guys have been playing together the last two years. That’s going to be our challenge, stopping those guys.”

Summerford said defensively, EA has the capability to man its opponent up.

“That’s going to be our challenge on offense, breaking that barrier or playing man cover,” he said.

Summerford said some keys on offense are that the Chiefs are going to have to control the game by running the ball. Defensively, they have to eliminate the big plays, he said.

Fountain said some keys for the game include who turns teh ball over.

“We’ve got to come in and not turn the ball over,” he said. “That’s going to be one thing for us, securing the football. The weather might be a factor. The team who secures the best normally wins.”

Fountain added that playing well up front is another factor.

“We both like to run the ball,” he said. “Whoever plays best up front has a good shot in the ball game.”