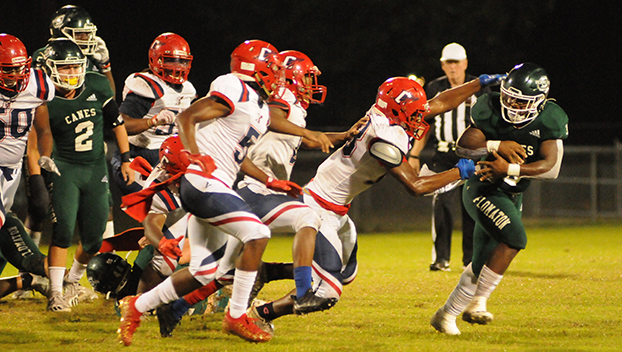 Leading 15-0 at halftime tonight, Flomaton overcame some adversity in the second half and held on late to beat Chickasaw 21-14 on homecoming.

The Hurricanes rolled in the first half, putting together good drives. However, Chickasaw recovered an early squib kick to start the third quarter and converted for a touchdown about 7 minutes later on a 56-yard pass to Thaddius Davis from Jarius Houston.

With the Chieftains within a touchdown from taking the lead, the Canes scored late in the third quarter to buy some insurance.

During the fourth quarter, CHS had momentum, but the Canes recovered a fumble to catch a big break. A short time later, Flomaton’s Will Rollin caught an interception with more than 4 minutes remaining.

In the first half, Damerion Findley scored on a 15 yarder with 6:33 left in the first quarter; and quarterback Zeb Vickery connected with receiver Quinton Odom on a 15-yard pass with 11:52 to go in the second.