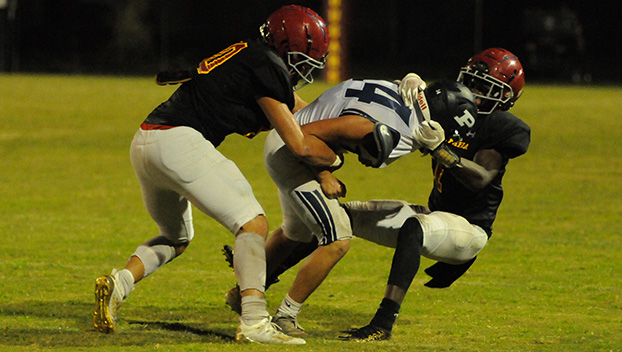 Big region implications are on the line as Escambia Academy visits Autauga Academy this Friday night in Prattville.

The top-ranked Cougars and second-ranked Generals are 6-0 each, and undefeated in AISA Class 2A, Region 2. EA holds a 2-0 record compared to AA’s 1-0 mark in the region.

EA head football coach Hugh Fountain said this week’s game will have a lot of bearing on the playoffs.

“It’s going to determine home field advantage,” Fountain said. “The loser is going to have to travel eventually.”

Fountain added that even though the Cougars have a whole lot of the football season ahead of them, the game against Autauga is the most important for the Canoe School at this point.

“It’s not the most important football game of the year, that one is the one that keeps you going or the one that puts you out,” he said.

Last week, the Cougars beat Chipley, Fla. 22-7 on the road. Quarterback Landon Sims was 3-for-7 for 62 yards and one touchdown in the air, and carried the ball 20 times for 167 yards and a score on the ground. He also added nine tackles on defense. Running back Christian Crook rushed 74 yards on 12 carries and a touchdown.

Fountain said AA has a good defense, and its offense is loaded with weapons.

Fountain said the keys for this game goes back to penalties and turnovers when playing a team that’s comparable to the Cougars.

“When you add all that up, it comes down to who’s able to run the ball the best, not turn the ball over and who doesn’t make the most penalties,” he said.

Fountain said Autauga is a good team, and EA is familiar on what it’s facing this Friday.

“We’ve been competing against them for years,” Fountain said. “Last year, they were down when they haven’t been in the past.

“It’s going to be a darn-good football game anyway,” he said.

Kick off in Prattville is at 7 p.m.