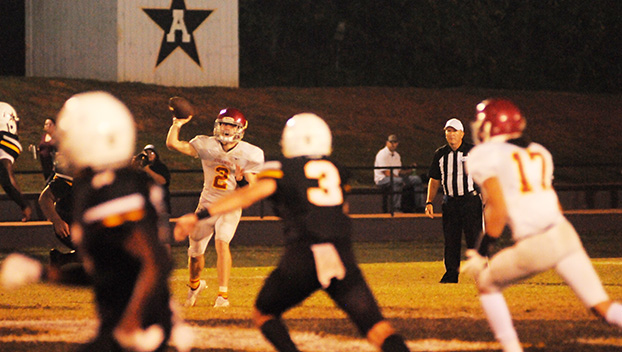 With the victory, the No. 2 Generals are in the driver’s seat in AISA Class 2A, Region 2. AA has two region contests left. EA falls to 6-1 overall, and 2-1 in the region with one more league game left. The Cougars face Southern Academy on Oct. 22 to finish out region play.

In an emotional game, especially near the tail end, the Generals found a way to put points on the board against a solid Cougars defense.

AA held a 17-14 lead at halftime, and the game went scoreless in the third quarter. The Cougars added a long field goal with 6:50 left to tie the game.

From there, Autauga’s Robert Rose III found receiver Jaylen Anderson for a 53-yard strike with 5:50 remaining.

EA got the ball back, and couldn’t get anywhere down field, and had to punt the ball away.

With the ball in hand, Autauga’s Karl Ligon rushed it 38 yards with 3:24 to help put the game away.

Despite the point differencial, the Cougars didn’t give up in the end, fighting until the final horn blew.

EA head football coach Hugh Fountain said a game always has a lot of emotions when you have two good football teams playing hard against each other.

“We just didn’t execute when we had to,” Fountain said. “Give them credit. They did a good job and made plays.”

EA quarterback Landon Sims and running back Bubba Nettles helped carry the load on offense for the Cougars. Sims’ 40-yard field goal with 6:50 left tied the game, and he had a 15-yard touchdown pass to Malaki Haynes late in teh second quarter to tie the game the second time. Sims added a 37-yard touchdown run with 30.6 seconds left in the first quarter that was aided by good runs from Nettles.

The Generals got on the board latre in the first on a Rose to Joshua Palmer 28-yard strike with 3:29 left Rose found Palmer again with 9:03 left in the second on a short 3-yard pass.

Right before halftime, Shawn Pierce hit a 41-yard field goal to help give the Generals their 17-14 lead.

Before AA put together its two touchdowns to pull away for good in the fourth, head football coach Bobby Carr was ejected from the game on an unsportsmanlike penalty.