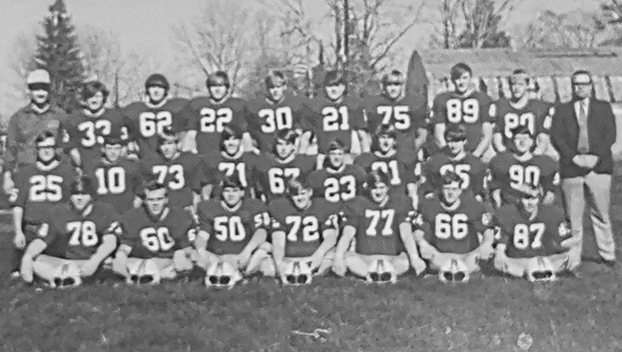 Escambia Academy’s first football team will be celebrating its 50th anniversary this Fri., Oct. 22, at the private school’s game in Canoe.

Prior to the game, members of the football team are holding a tailgate and will be recognized at halftime. The Cougars face Southern Academy this Friday in AISA Class 2A, Region 2 action.

Don Ward, who was the quarterback for EA on its first team in 1971, said the tailgate will also include former cheerleaders and former head coach Jimmy Brown.

Ward, who grew up in Atmore and now lives in Brewton, said the first EA team went 10-1-1 on the season. The Cougars lost in the semifinals in the state playoffs, and recorded six shutouts. In fact, the Cougars were upset by Southern Academy 7-6 in the semifinals, according to the Alabama High School Football Historical Society.

Ward said the team was led by 13 seniors.

Ward said during the 1970-71 school year, the private school had only 10 grades and no athletic program. He said Arthur Hall, John Bachelor (for which the field is named), Bob Cucker and Johnnie Woods were instrumental in forming the athletic program at EA. By the next fall, EA had 12 grades, he said.

Ward recalled the team having spring practice behind Canoe Baptist Church before the current stadium was built.

Ward said a fond memory he’ll always cherish was being named The Montgomery Advertiser’s game of the week when the Cougars traveled to face Monroe Academy.

“It was a very exciting game,” Ward said. “Being the school’s first team, and having gone up to 12 grades and beging ranked No. 2 most of the year behind Monroe Academy until we got upset in the semifinals was special.”

Ward said most of the team will be present on Friday.

He added that they’ll join the team captains for the coin flip prior to the game.