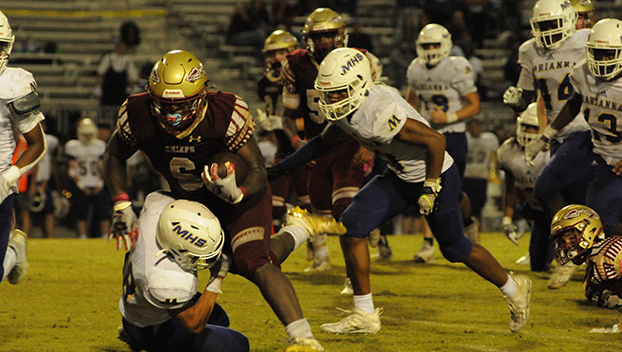 A stellar first half, a turnover on downs, a long run and a first down late helped propell Northview to a 21-14 victory over Marianna, Fla. tonight in Bratt, Fla.

The Chiefs, with their backs to the wall regarding the playoffs picture, needed a big win as the postseason nears. Marianna’s a Class 4A team, and wins over a larger classification nets a team more points. This victory comes a week after a tough 45-13 loss to Pensacola Catholic.

Head football coach Wes Summerford, pumped after the team’s win, said he’s been a tough past few weeks, and they knew they just needed to get back on the winning track.

“There’s no better time in the season to get back to winning football,” Summerford said. “This sets us up perfect on the playoffs. The kids fought their butts off. They knew what was at stake.”

With more than 3 minutes left in the game, Marianna had the ball deep in Chiefs’ terroritory. On a fourth down play, the Bulldogs tried for a pass, but the ball fell incomplete.

Northview then took over, where quarterback Kaden Odom converted a long run into Marianna territory. A few snaps later, Jamarkus Jefferson got his team a first down to ice the game.

At halftime, the Chiefs led 21-6. MHS added eight points in the third quarter.

Summerford said the boys played well defensively in the first half, which was the difference in the game.

“Kudos to our defensive staff,” he said. “I thought it was a brilliant game plan. They worked hard on it over the weekend. Our defense kept us in this one.”

Summerford added he knows that their offense will be back, and this was their first bad week of the season.

Odom was 11-of-18 for 157 yards, a touchdown and an interception; the Chiefs rushed 199 yards on 42 carries and scored two touchdowns; and had 356 total yards on offense.