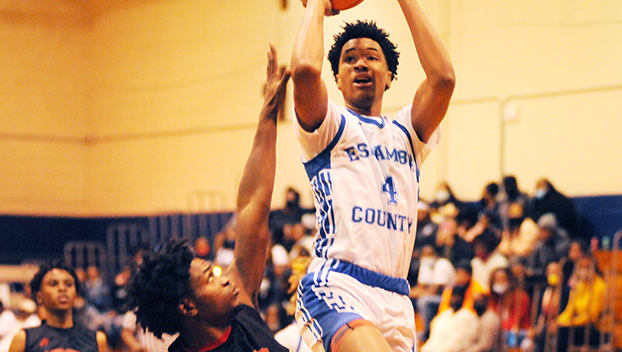 Early in the 2020-21 basketball season, Escambia County forward Sheldon Williams, then a junior, had a phone conversation with the late John Shears.

The former ECHS boys basketball coach encouraged Williams to take control and get his teammates in line with him.

That’s what Williams did for the remainder of the season, and plans on doing as he enters his senior campaign.

Williams said he got his winning mindset and drive for the game from his brothers. His older brother, Lue, was a standout for the Blue Devils.

“It just starts with me wanting to win,” he said. “I have a strong ambition for the game.”

Williams recalled a story when he was younger about playing basketball. Lue and his cousins were outside playing ball and wouldn’t allow Williams to play.

The senior said he went and told his mom (Shirley) and she made them get him on the team.

When asked how the first game went, Williams chuckled.

“It didn’t go too well,” he said. “They tried to take advantage of me and tried to push me off and not to play.”

Williams said basketball is his sport because he comes from a line of basketball players. Both of his parents, Shirley and the late Luerensley Williams Jr., played, along with his brothers and cousins.

“When I was younger I used to play basketball, football and baseball,” he said. “I used to be really good at football. I played youth football at Poarch.”

On the upcoming season, Williams said he believes the season will go well.

“I really think it’s going to go a lot better than last year,” he said. “We have a bigger line up. We established a lot of team chemistry over the summer.”

Williams said the team hung out a lot, and recalled having several meals together while playing in an exhibition in Foley.

At present, Williams is 137 points away from reaching the 1,000-point milestone. He said other than reaching that goal, he just wants to win a blue map.